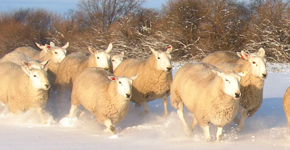 We decided to raise North Country Cheviot Sheep because they are hardy sheep, make great mothers that require little help at lambing time, stay very lively and challenging for training our dogs, and just happen to look great as they graze out on pasture.

We have not been disappointed. Each lambing season we are gratified to discover newborn lambs nursing vigorously from their protective mothers before we can even begin to worry about them. All we need do is grab the lambs (usually twins ) by the legs, carry them into lambing pens for the mothers to follow, clip and dip navels in iodine and check that the mother’s teats are not plugged (which sometimes, bur rarely happens). We often watch in wonder as the lambs are up and finding teats just minutes after birth and as the mother is licking them clean even as her muscles contract for the birth of the second of the twins. Though North Countrys are tough to handle when it comes to hoof trimming time, they are marvelous to work dogs on.

North Country Cheviots are a “hill breed” which means they are among the hardiest breeds of sheep. They were developed over the centuries in some of the roughest land in northern Scotland, so they had to be tough. You can find more about this breed by visiting our breed association’s web site (www.northcountrycheviot.com), the breed description of Oklahoma State University (www.ansi.okstate.edu/breeds/sheep/northcountrycheviot/index.htm) or an excellent history and description by Graham and Margaret Phillipson at Littledale Farm (www.littledalefarm.com/north_country_cheviot.html.)
Though our first purpose in keeping sheep was to train the dogs, we also wanted to take pride in our livestock, so with the guidance of our friend, Mark Johnson we established a purebred NCC flock. Half of our foundation breeding flock came from Littledale Farm in Wisconsin where Graham Phillipson has used artificial insemination to introduce genetics from the Longoe flock belonging to HM the Queen Mother of Britain. The other half of our foundation flock came from Mike Neary, the Extension Sheep Specialist at Purdue University, and a fellow sheepdog handler (ag.ansc.purdue.edu/anscext/faculty/Neary.htm).

Our sheep feed on a rotation of pasture from spring to December, and on our own hay for the remainder of the year. The lambs also get some grain to boost their growth in the first few months of their lives. The sheep are routinely wormed twice a year with chemical wormers (we have been advised that organic wormers just don’t do the job) so they are not certifiably “organic.” We worm more often only when it is indicated by fecal studies and when advised by a consulting veterinarian. We also try to keep our vaccination and medication routine to the minimum needed for good flock health. We will test the use of organic wormers in the future and we are actively seeking for the best in sustainable practices with sheep. Also, we have yet to use any insecticide or herbicide on the pasture, and rely mostly on spreading manure for fertilizer and the nitrogen supplied by legumes. So, our sheep have a natural, grass and legume based diet and management system which we consider “sustainable” and which is very nearly organic.
We sell North Country Cheviots as breeding stock and as many lambs as possible for local consumption. We sell fleeces to a hand-spinning market via the Illinois Green Pastures Fiber Cooperative.

We thank Mark, Amy and Emily Johnson of nearby A&M Ranch for fitting and showing two of our yearling ewes and two ewe lambs at the 2005 National North Country Cheviot Show (at the North American International Livestock Exposition in Louisville, Kentucky), and another similar set at the 2006 national show, also at NAILE. In 2005 our pair of yearling ewes took first place. As singles they placed second and third out of a class of 19. That same year the ewe lambs placed second and fifth in their class of late spring lambs, and, together they placed third in the pairs class. In 2006 our pair of yearling ewes placed second in their class and, as individuals took fourth and eighth. The ewe lambs placed fourth as a pair and fourth and sixth as individuals.