Pentecost 20A: Used by Trump or by God?

The alternative Old Testament Reading for this Sunday is Isaiah 45:1-7, where the Lord calls up Cyrus to be used as an instrument to subdue nations, strip kings of their robes, and open doors for the returning exiles. 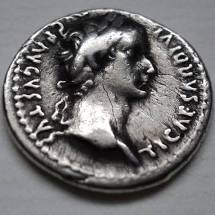 Roman coin with the image of Emperor Tiberius.

My sister is hurting. My wife is hurting. I am hurting. We are hurting because we see those we love being hoodwinked into putting the emperor above God.

I am terribly sad and alarmed by Christian loved ones who are being deceived and used by Donald Trump and the very worst voices of the Republican Party. (Where are all the honorable Republicans hiding?)

Indeed, Trump has been hard at work trying to harvest the fruits of decades of propaganda by the Republicans that have deceived “evangelical” Christians into thinking a perversion of a conservative political agenda takes precedence over God’s call to justice, mercy, and universal gathering into the banquet of salvation.

One of the tragic distortions that evangelicals have fallen into is to declare that, “Yes, Donald Trump may be imperfect, and yes, he might not ever ask for God’s forgiveness, or be a true- believer Christian. But he is just like the Persian King Cyrus, who God in Isaiah declares is an anointed one—a messiah—a Christ of sorts.”

But the true point Isaiah makes is that Cyrus is a tool. The book earlier says that oppressive and destructive Assyrian kings were also tools of God’s punishment. But the highest sort of human error, to Isaiah, is to be so arrogant as to think and act as if you are not the ax, but the hand that wields it. God is the hand—kings are his instruments—be they Assyrian, Babylonian, or Persian. Do not forget who is in control—who this world belongs to!

In Isaiah 10:15, the prophet pronounces doom upon arrogance that thinks otherwise.

Shall the ax vaunt itself over the one who wields it,

or the saw magnify itself against the one who handles it?

As if a rod should raise the one who lifts it up,

or as if a staff should lift the one who is not wood!

Jesus Christ, in our Gospel Reading, warns us not to be used by any political leader, be it the Emperor or the Emperor’s puppets. But there is a God who rightly uses us. To the former, we give our coins. To the latter, we give our ultimate allegiance—our hearts and souls.

Do not sell your soul!  If you are a Christian, consider that you may be doing just that by putting stumbling blocks in front of little ones who are looking to you. If those little ones see that you are selling out your faith to political expediency, they will be repulsed. Their way to the cross of Christ may be blocked. If they see you turn from the cries for justice coming from the world’s immigrants, the victims of white supremacy and gun violence, and those who have been shut out of the church because of the many labels used by those who want to hold onto power and privilege—and especially if they see you doing all that while you sanctimoniously misquote the Bible—then you will be judged by God harshly indeed. You will be putting up awful stumbling blocks for the little ones. And it would be better if a great millstone were fastened around your neck, and you were thrown into the sea (Matthew 18.6).

Dear ones: If you truly are used by God, please don’t let yourself be used by Donald Trump!

ALL OUR PANDEMIC BLOG POSTS CAN BE FOUND BY CLICKING ON THAT CATEGORY IN THE LISTING TO THE RIGHT OF THIS PAGE.

John is a retired pastor of the Evangelical Lutheran Church in America who has served congregations for over 40 years, including in rural, suburban, campus ministry and urban settings. His love of Border Collie sheepdogs has been fortified by his many friendships with shepherds all around the world. Nothing he has ever or will ever accomplish is as significant as the patience God, his wife and his friends have shown in putting up with his deficiencies.
View all posts by John →
This entry was posted in Church, Church and Social Movements, Faith, Featured, John's Posts, Pandemic Blog, Reflections on Sunday Readings and tagged anointed, compassion, conservative, Cyrus, Donald Trump, evangelical, immigrants, Isaiah, justice, Matthew, messiah, Republican. Bookmark the permalink.