Celebrating an Honorable and Vital Nation

As I transitioned from high school to college I had a burning desire to enter into politics. My patriotism burned hot. 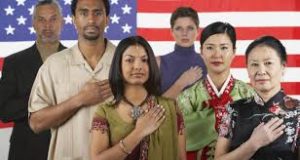 Happy Birthday to our nation, made great by immigration and diversity, and made alive by political action.

Today I wonder what would have happened to me if I had followed through with my dreams of going to law school and running for elected office. Almost without exception, when I spoke to my elders or my friends about my desires, they said, “It will corrupt you.”

There are two related problems with that sentiment and reaction: A stilted image of honor, and a poisonous aversion to politics.

Honor does not lie in purity.

I still get teary eyed thinking about the founding of our nation, and it’s great heritage since. But not for a moment do I consider that its honor is due to its purity. The litany of horrors is far too long to rehearse here. Suffice it to say that those white, European men who signed both the Declaration of Independence and the Constitution were all men, all white, many slaveholders, and all complicit in stealing land from natives, stealing souls from slaves, and stealing rights from women. Their courage and cleverness in opposition to tyranny made them saints. Many other of their ways made them sinners.

And yet, despite the self-serving philosophies and policies of those with the power, this nation has been flooded with the powerless. Peoples from all over the world, frustrated with injustices at home, have pulled up roots and come to this “land of opportunity” to provide for themselves and their families. And no people work as hard and as creatively as immigrants and refugees. Even Forbes Magazine has had to acknowledge that well over a third of all US Nobel Prize winners in science have been earned by immigrants. That has been true since 1901, and the same proportion holds true today. cf. https://www.forbes.com/sites/stuartanderson/2019/10/14/immigrant-nobel-prize-winners-keep-leading-the-way-for-america/#603dfd604d4b

It is also a miracle of God’s grace that the descendants of Africans that the white races brought by force to this nation, all in the name of free-market principles–descendants of those who  fed the nation with their blood and sweat–have hung in there with this horribly flawed nation. They have endured, they have given of their genius and talent, they have even fought for this nation to make it great.

You see, it takes more than physics and chemistry to build a nation and to keep it strong. It takes restaurant owners and cooks. It takes doctors, nurses, technicians, and those who clean the floors and do the laundry in our hospitals. It takes landscape designers and workers. It takes police and social workers. And this nation is so obviously great because of the sweat equity of its formerly enslaved peoples, its immigrants and refugees, that there is no legitimate argument against it.

The honor of our nation is not in it’s incorruptible  nature–its purity. There is no pure past or a pure ideal to live up to. Our honor has been in spite of ourselves. In spite of our innate narrow-mindedness, greed, and selfishness, other people have refused to disappear. They are the peoples we have used and trampled and tried to throw away. They are the native tribes who haunt our corporate memories. They are the “huddled masses yearning to be free.” They are those we would like to silence and drive away, but who keep rising again and again to give to us what we didn’t even know we were missing.

They are those who now protest and tear down statues, trying to save us from our own dishonor.

As to the poisonous aversion to politics; it is my greatest fear. Politics is noisy and messy, but it is our heartbeat. Politics has to do with the distribution of power, and when power is at stake, people get desperate. Those with it grow desperate to hold on. Those without it know that they must take it—it will never be given without a fight.

But the power of a nation lies in its sharing.

And our history is strewn with the disasters that have happened when people have not spoken or voted or acted for the common good, purely because they gave themselves the excuse to be inert by saying, “It just doesn’t matter—they are all corrupt.”

America is great because of immigrants, refugees, and the wild diversity of its people. America lives because people speak up, act up, and vote.

God bless America with more of this kind of honor and vitality.

FIND ALL OUR PANDEMIC BLOGS BY CLICKING ON “PANDEMIC BLOG” IN THE CATEGORY LISTING TO THE RIGHT OF THIS PAGE.

John is a retired pastor of the Evangelical Lutheran Church in America who has served congregations for over 40 years, including in rural, suburban, campus ministry and urban settings. His love of Border Collie sheepdogs has been fortified by his many friendships with shepherds all around the world. Nothing he has ever or will ever accomplish is as significant as the patience God, his wife and his friends have shown in putting up with his deficiencies.
View all posts by John →
This entry was posted in Featured, John's Posts, Pandemic Blog, Social Political Issues and tagged America, constitution, Declaration of Independence, diversity, government, honor, immigrants, politics, race, refugees. Bookmark the permalink.