A Brother’s Death and Thoughts of Home

My big brother, Jim, died last week. So I drove, alone, to Louisville for his funeral. Connie and I couldn’t make the arrangements for the care of the animals on the farm with the storms and coyotes and a bitch in heat. And so I drove alone. 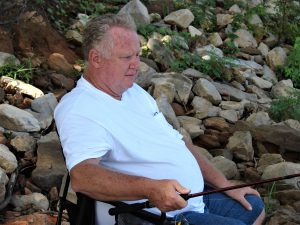 My big brother, with a big heart, Jim. Photo by John

The rain poured and wind forced me to fight to stay in my lane, and stay safe for the six hour drive. Then I walked into the Evergreen Funeral Home on Preston Highway, and all my composure collapsed.

I was back in the loop. Hundreds of miles, a different time zone, a different world of busy concerns, and we drift. We aren’t in touch as much as we should. But cords bind tight, nonetheless. And the instant I walk in those doors where we said goodbyes three and a half years ago when Jim’s wife, Carol died, and the instant I saw Jim’s sons Jeff and Jimmy and Jason, their wives, and then my sister, Jane…the sobs just kept coming.

Hours of talking with family and friends drained me; but the next day, after a good breakfast and good coffee, I went for my usual Louisville drive—tracing the way of almost all my dreams.

Second: Madhouse traffic along the Interstate, around the airport and fairgrounds; and I could see my younger self, picking up my papers for delivery, and wondering where the hell all the people were going.

Third: No matter how many times I’ve made this pilgrimage as an adult, I’m still surprised about how small and close everything seems. I still carry that childhood perspective of this personal universe. Fayette Avenue to Fern Valley Road? So way out there! But really only a few minutes’ drive.

Fourth impression: Entering into my old neighborhood is like going through a decompression chamber—up too fast—getting the “bends,” kind of feeling. It’s not just memories—it’s the eruption to the surface of all I’ve carried with me.

Overall impression: The closer to home the more shocking the change. The streets are the same. The trees are the same. The sounds of the birds are the same. But all is different. Value City Furniture stands where my school used to be. Lots of other stores instead of the two little farms where I delivered the papers. No Doug Shirley on that corner. No Kenny Jackey in that house with the Magnolia Stone. No Butch Boblitt, or Moody kids, or Georgie Miller. No kids outside at all. No ball games. No shouting. No dogs wandering from back porch to back porch. Too many cars out front. Too many cars, nobody walking or biking or running.

A train was standing along the tracks. Okay. But the planes were obviously using a different flight path and were no longer scraping the top of our chimney as they roared overhead.

And our old house. Which one is it? And no Lynn Werst next door, or Miss Borman, or Davy Hamilton or Sarah Mary or Louis. And no Ruth Seraphine putting the sheets on the line to dry. No Dudley, smoking a cigarette in the swing and looking for the Purple Martins to come enjoy the double-decker house he had cleaned out for them.

I drove back to my motel, at the Interstate intersection and on an industrial corridor. Then, at the light to turn into the service drive to the motel, a young woman stood, facing the traffic, holding up a cardboard sign that said “Homeless.”

It killed me to think. Asphalt, and concrete, and car exhaust, and noise, and decay, and confusion, and no retreat–no one to touch the pain, and no one to share the questions with no answers.

There are three things that abide—these three: Faith, Hope, and Love. And the greatest is Love.

But love lives in family. Not family contained by a house, but family that overflows into home—family that is fueled by an instinct that EVERYONE hungers to belong. Everyone should belong. We must be restless until everyone rests and belongs.

The Apostle Paul called all believers in cross-formed love, adelphoi. We used to translate that “brothers,” but now know to translate it “brothers and sisters.” But adelphoi live in a cross-formed family in which people believe no one belongs outside. All belong inside. And we ache as Jesus ached to see anyone homeless and family-less. Jesus thought and ached like a hen aches to gather every chick and every sheep–even those outside the fold. Even those way outside.

So, while concrete can be poured, and “progress” can whiz by and pollute and destroy, there are things that abide: Faith, hope, love, and the belonging we all hunger for.

At his funeral we were reminded by a dear friend that Jim, my big brother, presided for years over youth athletics on Louisville’s south side. He saw lots of kids who wanted to take part, but didn’t have much in the way of family. So he welcomed them into his. He gave discounts. He gave candy. He taught kids how to follow the rules that mattered, and how to break the rules that got in the way. He helped them shoot off a lot of fireworks, and eat more and more candy. Through it all he was the Good-Time Charlie for three generations. And the spirit of a cross-formed love that rippled and shaped Jim’s spirit, keeps rippling out for all the generations to come

And so, there were lots of sobs going on at Evergreen Funeral Home this week. But before they sealed Jim’s body behind the granite at the Mausoleum, there was a good-ole funeral rule-breaking song to celebrate his spirit that can’t be contained. I guess it was called “Baby Shark,” a song the grandkids and their friends knew Jim hated. But they also knew he loved to tease and to be teased, he loved to break the boundaries of family, and he loved it when people broke the rules that got in the way. And so they sang it for Jim and for all of us, so that we could cherish the things that abide.

The ripples keep on. And these things abide.

John is a retired pastor of the Evangelical Lutheran Church in America who has served congregations for over 40 years, including in rural, suburban, campus ministry and urban settings. His love of Border Collie sheepdogs has been fortified by his many friendships with shepherds all around the world. Nothing he has ever or will ever accomplish is as significant as the patience God, his wife and his friends have shown in putting up with his deficiencies.
View all posts by John →
This entry was posted in Faith, Featured, John's Posts and tagged death, family, funerals, home. Bookmark the permalink.

2 Responses to A Brother’s Death and Thoughts of Home