Other days I would toss and turn myself back to sleep and get up at  7:30, but this day we were a week past what the calendar said was the start of lambing, so there was the extra electricity of being needed in the barn.

I skipped my stretching, roll-ups and leg lifts, pulled on my dirty jeans and smelly flannel shirt and my muck boots. Just a hint of sun coming up in the east. Robins and cardinals sweetening the air—with temperatures so much more humane now–in the upper 30’s and 40’s rather than winter’s below zero with ripping winds. Thank you, Lord!

I peek around the feedlot. Nothing.

Then I’m inside the barn and there is a ewe on her side, legs straight out. Labor. How long? The first sure signs of birth; but could it be a stuck lamb?  With a tinge of worry on my mind I put Frodo, the guard dog, out in the pasture, move to shoo the other ewes out of one side of the barn and the yearlings out of the other, and close the doors behind them. Turning back I see the mother standing and a still heap of white that she is now nosing. I quickly don OB gloves, and by the time I reach the new lamb, it is shaking its film-covered head. It may even have bleated before I can smear off the birth sac from around its nose and mouth.

A ram lamb. Nice size—not too big like many of last year’s. Bleating–mother chortling.

I move as quietly as I can, opening the pen, positioning the iodine cup, plugging in the heat lamp. I turn around and there is a second white heap behind the mother, who is licking dry the first lamb. A she this time, and she is shaking her head by the time I don a glove again and clear her nose and mouth. 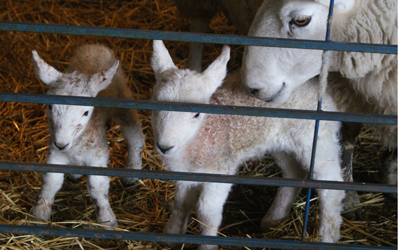 Heatherhope’s first lambs of 2014. A ewe-lamb on the left and a ram-lamb on the right. Photo by John

And through it all my heart keeps pouring out thanks. Thank you, Lord, for warmer weather. Thank you for the sweet renewal of spring. Thank you for new life. We thought the ewes all looked fat, were bagging out, relaxing their vulvas, but after a week we were getting a bit sour. Now, here is life! And thank you, thank you that I am not dragging breathlessly as I was last year with fluid collecting around my heart. Thank you that I’m not worrying that I might collapse and that I’m not lying in a hospital bed worrying because Connie is having to take over the the lambing–like last year!

Lamb and mother in a warm, dry pen–mother fed with grain and hay—all the other sheep fed, I grab a biscuit and, on my way back to the house to tell Connie the good news, pass Frodo. As I give him his breakfast biscuit  I thank him for keeping watch over the mother as she started her labor. He takes the treat and then smells my hand and arm. He looks happy. Smells like another miracle of life!

John is a retired pastor of the Evangelical Lutheran Church in America who has served congregations for over 40 years, including in rural, suburban, campus ministry and urban settings. His love of Border Collie sheepdogs has been fortified by his many friendships with shepherds all around the world. Nothing he has ever or will ever accomplish is as significant as the patience God, his wife and his friends have shown in putting up with his deficiencies.
View all posts by John →
This entry was posted in Farm Diary, Featured, John's Posts, Sheep and tagged Frodo, lambs, life, Sheep, spring, winter. Bookmark the permalink.