This morning, March 12, 2014,  we awoke to a one-inch covering of snow and a temperature of about 25 degrees. The wind chill probably brought it down to about zero.

Not bad. We pray it may be one of the last blasts of winter, but by this time we are hardened. 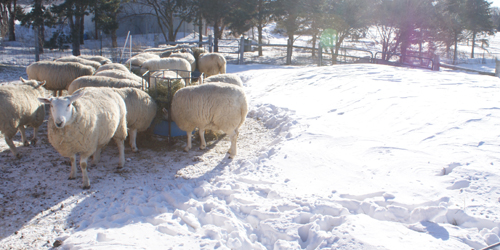 Drifting snow has eaten up over half the feedlot this winter. Photo by John

It’s now past noon and my feet are still quite chilled because I had to first exercise the dogs…twice, since we put Betty, the Border Collie, back in her kennel after the first run so that we can take our son’s Schnauzer-mix out, since she and Betty don’t get along, then feed and water all the sheep, then plow the lanes with the utility tractor. The tractor is open-air and the seat is frozen, so it does tend to chill a body.

But this has surely been a winter to survive. Many dips of polar air into the Midwest and many “snow events” have made for plenty of challenges. The latest couple of wrinkles have been the breakdown of our quad bike/ATV that took four days in the shop and a cost of $1,000 to replace the starter clutch and do many other rings and seals, etc. to make it stop burning oil; and then member of our writing circle slipping her foot onto the accelerator instead of the breaks and crashing through our water hydrant. Carrying several jugs of seven gallons of water out to the flock pushed me about to the  limit.

Each day for the past three months has called for calculation and strategizing. How hard is the wind blowing the snow? When do we plow? Will we have to jump start the tractor and will the ATV start? How many layers of clothing do we wear, and do we wear cleats? Will the ATV get through the snow or do I cross-country ski with the dogs? Will the sheep or the guard dog walk out, over the drifts that now burry the fencing?

People keep asking me how the sheep are doing. They have three inches of wool insulation and they are doing just fine. It’s Connie and me that I worry about.

The sheep are resilient. Yet this morning I read about a “petting zoo” owner who has just been indicted. Authorities found first a dead horse and fetus on her grounds. Then 94 animals that were crowded and starving, with frozen water. Several dead animals were found in mounds of feces-matted straw.

It was a reminder. None of our animals are self-sufficient. They all depend on us. Every day, many times a day, we must do the things that keep them healthy. And thanks be to God for those who tend to livestock around the world to feed us.

A recent article in the New York Times (http://www.nytimes.com/2014/01/26/opinion/sunday/pastoral-icon-or-woolly-menace.html?emc=eta1&_r=0) disturbed me. The author and the other author he quoted extensively, are considered by many to be experts in environmental issues. Their claim was that the sheep industry in Britain was ruining the countryside there—making it look like a “nuclear winter.” They advocated a “re-wilding” of Europe for the sake of the environment.

Anyone who knows livestock and knows anything about the British countryside should know immediately that these two so-called experts are just plain silly. The British countryside is beautiful. It may not look as it did 2,000 years ago, but it helps sustain a huge population and, at the same time, a very green, very beautiful, very un-nuclear-winterish, very sustainable ecosystem.

But it is the people who, day in and day out survive and help us all survive, and care for the land and the animals that sustain us all, who deserve our thanks, not our criticism. Environmentalists who write their articles but who never grow a single thing to feed people, need to get real. They need to learn that sheep are doing more than leaving “carbon footprints.” They are contributing to a diverse landscape. They are keeping machinery and chemicals off the land. They are controlling invasive species. They make marginal land productive. And, most importantly of all, they are feeding and even clothing people.

It’s all part of surviving.

John is a retired pastor of the Evangelical Lutheran Church in America who has served congregations for over 40 years, including in rural, suburban, campus ministry and urban settings. His love of Border Collie sheepdogs has been fortified by his many friendships with shepherds all around the world. Nothing he has ever or will ever accomplish is as significant as the patience God, his wife and his friends have shown in putting up with his deficiencies.
View all posts by John →
This entry was posted in Farm Diary, Featured, John's Posts, Sheep and tagged agrarian, agrarianism, environment, environmentalism, livestock, Sheep, Sheepdogs, survival, surviving, weather, Wendell Berry, winter. Bookmark the permalink.