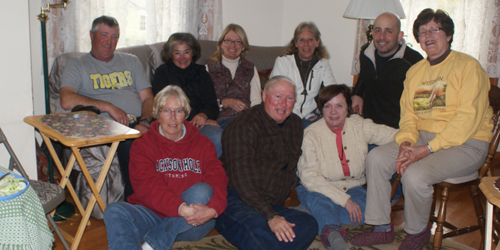 Gordon Watt (l) and his students at the 2013 clinic at Heatherhope. Photo by John

Handler after handler walked off the field thrilled by the improvements their dogs and their handling made in a very short time.

Gordon Watt, Irish, English and World Champion handler and trainer worked with ten different handlers and eight or so different dogs on November 7 and 8 of 2013. He showed them how to relax themselves and relax their dogs so that the dogs would develop more feel for the sheep and more confidence.

Some dogs were just learning to handle sheep for the first time. Others were shedding and learning to look back and to take re-directs on their outruns.

But in every case problems were overcome and significant improvement was made.

We were all so pleased that we will be working to have Gordon back in the future. Any handlers who want to be notified of upcoming clinics should e-mail us here at Heatherhope Farm. 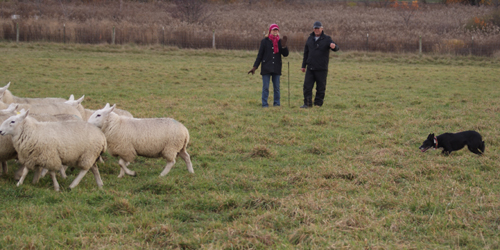 John is a retired pastor of the Evangelical Lutheran Church in America who has served congregations for over 40 years, including in rural, suburban, campus ministry and urban settings. His love of Border Collie sheepdogs has been fortified by his many friendships with shepherds all around the world. Nothing he has ever or will ever accomplish is as significant as the patience God, his wife and his friends have shown in putting up with his deficiencies.
View all posts by John →
This entry was posted in Border Collies, Farm Diary, Featured, John's Posts, Sheep and tagged clinic, Gordon Watt, handling, sheepdog. Bookmark the permalink.