What a March! What a start to lambing!

This has been a remarkable March at Heatherhope Farm!

First and foremost, of course, was the wedding of Rebekah and Michael Holcomb who spoke their vows on March 10. Jeremiah, our son, and Connie and I traveled down to Gainesville, Florida for the wedding and cherished the lovely opportunity to get to know Michael and many of the friends they now share as husband and wife.

We also had a great time with Rebekah’s mother, Anne, her husband, Dave, and Anne’s three sisters and brother. We remembered good old days and shared heartfelt hugs.

The love that God shares with a couple can be a great gathering force!

And then there was the awards dinner on March 16th, sponsored by the DeKalb County Soil and Water Conservation District. It was a somewhat embarrassing surprise to be recognized as this year’s recipient of their Sustainable Agriculture award for the way we run Heatherhope Farm. The banquet drew quite a full crowd and they mentioned our employment of a number of sustainable practices here as well as our work at staging events such as sheepdog training clinics and seasonal gatherings like Meet and Greet the Lambs, Midsummer Fest, Blessing of the Animals and Heatherhope Epiphany.  It was great to have Sandi and Bill Scott and Chauncey and Karen Watson join us for the banquet.

We give hearty thanks to Soil and Water Conservation District staff members Dean Johnson, Mike Richolson, Paul Searl and Sandra Warner for the fabulous program on the 16th, but even more for their dedication and hard work in helping farmers do what they should be doing as stewards of the land. All the members of this staff are extremely competent and gracious in their work and deserve the thanks of the public.

This month has also been quite different because for nine straight days we set high temperature records. And most of the month we have been way above normal in temperature–often thirty degrees higher than normal! Many days in the 80s Fahrenheit!

Last but not least –the lambs! 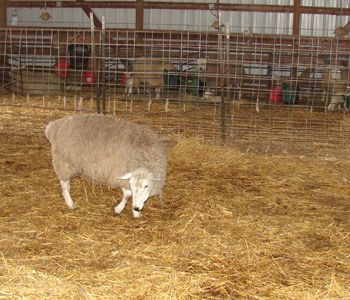 We watch one laboring ewe with our full lambing pens in the background. Photo by John

Last year we had a disastrous lambing season. After all our preparations we slowly realized that we would have only one lamb born here. So we traded in that ram for another, and actually used three rams in succession last fall, just to make sure.

But then, Alleluia, on Wednesday, the 21st, we had our first single lamb born. It thrilled us and we started to strut around with a happy spring in our step.

And we needed that spring, because the lambs kept coming. We had ten lambs born by six ewes in a 24 hour period. Then they slowed just a bit, but kept coming, so that we now have 13 lambs out of nine ewes. The Alleluia’s have kept coming, but they have been mixed with some lamentation.

Two ewes help us provide the lamentation since they lost their lambs. For some reason the lambs are often particularly big this year. One was struggling while Connie and I raced to put up another jug, or lambing pen (we have our maximum of seven up now). I knew I had to rush, but by the time I got to her, her huge lamb had it’s tongue out. I pulled and got it out. I swung it in the air quite a number of times and messaged it frantically. But no breath came. So we had to pen her up and keep her from water and feed for a while to dry her out. Her lost lamb was 14 pounds, two ounces.

Then, last night another ewe seemed to be in labor, but we kept watching her and she settled and seemed not to be straining at all. So we left her. Last night we didn’t get up for an early morning check because we were both so tired. But at 7 in the morning we found the ewe out in the feed lot with another dead lamb which we weighed at 12 pounds, 4 ounces. The head was enlarged as they often become after a strained delivery.

Lessons learned. This year we are having lots of biggies – one set of twins weighs in at about 14 pounds each.  And we are having to assist or pull several, while in past years almost no ewes needed help. This may be because we are feeding too much, because we are feeding too much, or because these ewes failed to lamb last year. Or it may be because of all three factors.

But, in the midst of all of this, the ewe with two huge lambs, wouldn’t milk. We stripped the teats, but the milk wouldn’t come. So we tried two injections of ¼ ml of oxytocin, given four hours apart. After hours of no milk we milked colostrum from another recent mother with a single and mixed with store-bought cow colostrum and gave tube feedings to both lambs, who are, fortunately quite strong and healthy. Finally, last night, just before we were to try to start those two lambs on bottle feedings, we noticed that the mother ewe was producing milk out of one teat. The other side of her udder is hard and must have mastitis, but one teat  is enough if we keep this ewe healthy. Another reason for an Alleluia!! 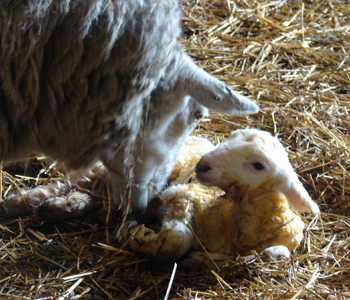 So we have 13 live lambs and we have lambed 9 of our 36 bred ewes, with much more excitement and hard work to go. But, even with the tragedy of losing a couple of lambs, and even with hard work and the the loss of sleep, Connie and I feel more alive because of the rush of life on the farm. There is nothing quite like it. And we know that those who denigrate the raising of livestock, do not rightly appreciate that this is a vital and good part of human history, economy and culture. Sheep production, especially, provides a tremendous component of a balanced use of natural resources.

It is a great thing to be a part of that pulse of life on earth!

Hooray and hallelujah for lambing!

John is a retired pastor of the Evangelical Lutheran Church in America who has served congregations for over 40 years, including in rural, suburban, campus ministry and urban settings. His love of Border Collie sheepdogs has been fortified by his many friendships with shepherds all around the world. Nothing he has ever or will ever accomplish is as significant as the patience God, his wife and his friends have shown in putting up with his deficiencies.
View all posts by John →
This entry was posted in Farm Diary, Featured, John's Posts, Sheep and tagged conservation, lambing, lambs, March, marriage, soiil, water, wedding. Bookmark the permalink.