Our CapXAbbie Pup For Sale

We have one male puppy available from our litter born November 20, 2012. He is one we have temporarily named Bart, though the buyer would, of course choose the permanent and registered name.

He, like all the others, is very healthy and athletic. Parents are our open dogs, Cap and Abbie who each garnered about 15 national points last year in the small number of trials we manage to compete in. Both parents also have outstanding pedigrees, available on our “Dogs” page, found along the the tabs at the top of each web page.

We want to place this pup with someone who works dogs on sheep, and possibly trials. 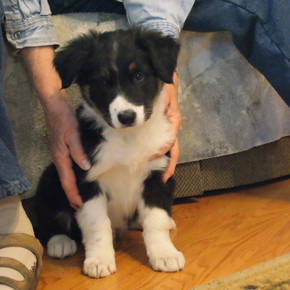 Bart at almost 9 weeks of age. Photo by John 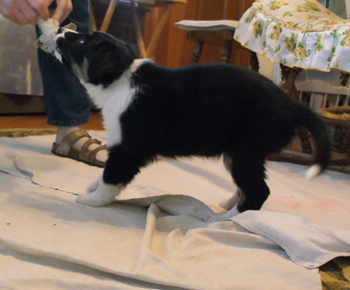 John is a retired pastor of the Evangelical Lutheran Church in America who has served congregations for over 40 years, including in rural, suburban, campus ministry and urban settings. His love of Border Collie sheepdogs has been fortified by his many friendships with shepherds all around the world. Nothing he has ever or will ever accomplish is as significant as the patience God, his wife and his friends have shown in putting up with his deficiencies.
View all posts by John →
This entry was posted in Border Collies, Farm Diary, John's Posts, Uncategorized and tagged Bart, Border Collies, puppies, pups. Bookmark the permalink.