Who can resist puppy love? 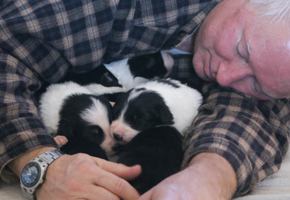 Puppy love is our drug of choice! Abbie and Cap's pups at 3 weeks. Photo by Sandi Scott

The schedule at Heatherhope is dominated by puppies. But that is a great good thing!

The five puppies have been given temporary names. The two boys are Hector and (Black) Bart and the girls are Betty, Olive, and Target (pronounced, of course, tar GAY with a soft “g”). Bart is the blackest, olive has an olive-shaped black area in the middle of the blaze on the top of her head, and Target has a white arc around her rump making what looks like a bulls eye.

They are just now turning 4 weeks old. We are feeding them baby oats and rice with milk and some baby food meat.

Dogs of all ages, and especially puppies need two things most of all–socializing (affection from plenty of people) and time and space to explore. So we have had lots of people in to hold and pet them, and we ourselves have a ball with these things. And we give them spaces and toys to explore. They wag their tails the most when they explore.

And then, after about 15 or 20 minutes of such activities, they gather in a pile and sleep. This is the time I treasure. I get on the floor and make a little circle with my arms and speak softly to them. They love to lick my cheeks when I lick my lips, and they love my breath. Then they put their heads on my arms and fly off to never-never land.

Soon they dream of phantom-like sheep and they twitch and bark a bit.

Nothing could be more potent that puppy time and puppy love.

John is a retired pastor of the Evangelical Lutheran Church in America who has served congregations for over 40 years, including in rural, suburban, campus ministry and urban settings. His love of Border Collie sheepdogs has been fortified by his many friendships with shepherds all around the world. Nothing he has ever or will ever accomplish is as significant as the patience God, his wife and his friends have shown in putting up with his deficiencies.
View all posts by John →
This entry was posted in Border Collies, Farm Diary, Featured, John's Posts and tagged Border Collies, Dogs, puppies. Bookmark the permalink.

1 Response to Who can resist puppy love?