“And when I die…and when I’m dead, dead and gone, there’ll be one child born and a world to carry on.” 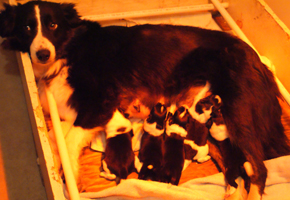 Laura Nyro wrote those lyrics and Blood, Sweat and Tears and Peter Paul and Mary sang them.

But, in our case, it was one dog, Floss, dying a few weeks ago and now five pups being born to Abbie. Floss was our amazing almost 16-year-old, and Abbie is doing great things to keep up the working tradition and we expect the same from her pups.

Actually there were six pups born on Sunday, November 20, but one tiny female didn’t make it long and had to be buried near Floss and Mirk and Queen under the big apple tree.  But there are three good looking females and two males that are getting good nourishment from their mommy in the whelping box and putting on good weight.

We will be keeping a male and perhaps a female from this litter. Both parents are strong working dogs with great pedigrees, and we are now watching two-year-old Spot,  from Abbie’s first litter, as he develops. He seems to be the kind of dog with a lot in him, and we expect he will have quite a bit left when we take a bit more of the steam out of him. He’s a handful, in other words.

Here’s a bit of other information about the pups for anyone interested. We want to place any pups sold with good working/trialing homes.

Imp. Abbie  (ABCA  328305   and ISDS 288244 has been going great for me. This year she was close many times to scoring big, but strange things happened. She had a good run her second time through at Bluegrass, but was overheating and suffering (we found out later) from giardia. She ran out of time twice in a couple other trials just before I called her through on sheds – which put her just out of the money. But last year she had about 15 national points out of our meager trial schedule.

Abbie is now four years old. I bought her from Gordon Watt when she was just turning a year old. He was training her for a friend and told me she was the best young bitch he had ever seen. Her pedigree is top notch—strong on both sides.

Her sire is Cap ISDS 266571, who was owned by Derek Scrimgeour and did quite well as a nursery dog before he was injured and sold to America. Cap was sired by Raymond MacPherson’s Dolwen Chips who was 2nd in the English National in 1996 and won the International  Driving Championship that year. He won that same championship in 1994, when he was 10th in the International Supreme.  Other champions in Cap’s lineage include H. G. Jones’ Taff (167290), who won the 1993 Welsh Brace and was 4th in the 1991 Welsh singles and 11th in the 1995 International Supreme; Supreme Champion, Sidney Price’s Davy, E. W. Edwards two-time International Supreme Ch., Bill; H.G. Jones’ Bwlch Bracken, The Butcher’s Mac, and, of course Wiston Cap.

Cap (ABCA  240965), is the sire of these puppies. He is now seven years old and is a most reliable and capable dog on the farm. Last year he wound up with about 16 national points and this year he won the first run of open at the August Three Sisters Trial. Cap’s sire was our imported Mirk (ABCA 232531 and ISDS 236175) whom we bought from Bill Elliot in the Borders of Scotland. Mirk’s father was Norman MacDonald’s Zac, a powerful key Scottish sire who goes back to a lot of John Templeton’s breeding (Ben, Roy, Moss) and to Dryden Joe. (Michael Gallagher’s Cap, winner of the 2010 International Supreme, and 4th in the 2011, also had MacDonald’s Zac as a grandsire) and Cap’s mother was George Turbull’s Bess, a daugher of his Nicky with whom he was 2nd in the 1994 English National. Bobby Dalziel tells me Cap takes after Nicky, a dog Bobby liked quite a bit. Nicky was a daughter of John Bathgate’s Vic, ISDS 128240 who was herself a daughter of  Templeton’s Roy. Turnbull’s Bess was a grandaugher of Dryden Joe.

Cap’s dam was Liz, bred by Bill Elliot and bought by Wally Yoder. Her father was Bill’s Cap, whose father was Johnny Wilson’s double International Supreme Champion Spot. Cap’s dam was his Gael, who went bact to McTeir’s Ben and Guild’s Tweed.   The dam of Liz was Roddy McDiarmid’s Dot, herself a grandaugher of Roddy’s Cap.

Both of Cap’s parents were multiple nursery winners in Scotland before being imported.

Abbie and Cap have one surviving pup from her first and only litter, born Nov. 18, 2009. One pup, though it was well formed, was dead by the time we got to it in the morning. We kept the male pup, whom we named Spot. Not having any “quiet sheep” to start him on set me off in the wrong direction when Spot came on early and strong. He didn’t like sheep breaking off from the group and would go after them and grip. After some struggle with him I am excited about the way he is now working. He has a good 150 yard outrun and we are making progress on driving and inside flanks. If things work out he will be in next spring’s nursery trials.

I will be happy to answer any questions about either parent. Just find me on the “contact us” tab near the top of each web site page.

John is a retired pastor of the Evangelical Lutheran Church in America who has served congregations for over 40 years, including in rural, suburban, campus ministry and urban settings. His love of Border Collie sheepdogs has been fortified by his many friendships with shepherds all around the world. Nothing he has ever or will ever accomplish is as significant as the patience God, his wife and his friends have shown in putting up with his deficiencies.
View all posts by John →
This entry was posted in Border Collies, Farm Diary, Featured, John's Posts and tagged abbie, Border Collies, cap, Dogs, farm, heatherhope, herding, pets, puppies, sheepdog, Sheepdogs, Spot. Bookmark the permalink.

1 Response to Abbie Has Five Puppies