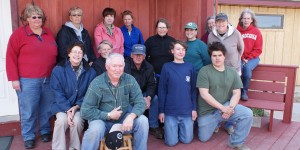 Bobby Dalziel (blue hat) and his students at the April, 2011 clinic at Heatherhope. Photo by John

Well, now that I’m fully recuperated from hosting our second six-day clinic with Bobby Dalziel, I should post some comments.

These comments, of course, will be very personal, but, I hope, also honest and accurate enough to help people decide whether to work with Bobby in the future.

These days there is a richness of opportunity for American handlers to take lessons from top handlers. And I am a firm believer that the more exposure to great handling and training, the better. Even if you see different approaches—and perhaps even especially if you do so–you will gain if you keep yourself open to new ideas.

Even when the the ideas of different handlers seem to diverg greatly, they will make more sense when your understanding deepens and you see perhaps the trainers were talking about different dog temperaments or different situations.

I must say that Bobby Dalziel’s approach to training young dogs, which utilizes a very long line and a lunge whip, was so different from what I had been exposed to before, that it was very difficult for me to apply. But now that I have worked with him for 12 days I am beginning to see the light.

Bobby absolutely LOVES to work with strong and tough dogs. I think he sees himself excelling with this type, and he understands his method of exerting complete control over a dog early on as bearing the most fruit with the most challenging  of dogs.

I believe I most benefited from his approach because it allowed me to become quieter with my dogs. In fact, his approach demanded this from me. I think I was fairly typical in thinking that I had an acceptable stop on my dogs even though I would often have to repeat the command several times, louder and louder, before I got a positive response. I thought it was acceptable for the dog to often get going on its own without my “walk” command, and that it was quite natural for me to have to keep stopping the dog and “leap frog” it down the fetch or the drive to keep the sheep from being pushed too hard. But Bobby had me go back to the drawing board and put the dogs on a long line (about 80 yards long) so that I could both control the dog and have immediate feedback. Then I could immediately take notice when the dog wasn’t complying with my commands. I learned I could expect a dog to lie down immediately the first time asked, and stay there till commanded on. I learned that the sheep acted far differently when the dog was not “leap frogging.” And that the dog moved differently—far more purposefully—and had a much more calming effect on the sheep.

At this second clinic we also had far more sheep to work with and so Bobby showed us a far greater variety of exercises. Different natured sheep, in different numbers, in all sorts of practice areas, allowed Bobby to show that there was a solution for every doggie problem. Participants remarked how much easier it was to work on one problem at a time with their dogs and to proceed much more patiently from stage to stage with a dog’s development.

Bobby believes in quiet handling. He advises putting a dog of seven months on a line and walking it behind sheep at a steady pace for the first two months of a dogs life. The dog is learning without knowing it, Bobby points out, and by the time it is nine months old it is ready to do serious training.

The emphasis on working on a line without talk was most helpful for me. I have been working recently with my Spot, born November 18 of 2009. While my other dogs would get out wider on flanks with a “get out” command, and pass up on opportunities to bite the sheep when I growled or yelled at them, such noise would just wind Spot up. He interpreted my growls as a command to bite all the harder.

Working without making a sound surely helped to get Spot over his gripping. And the habit of working this way has spilled over into my handling even on the trial field where I had been building a reputation of one of the loudest handlers in history! New habits working alongside quiet Bobby Dalziel, has proven very beneficial to my dogs, my sheep and me.

Bobby’s approach does pay off best if handlers can work with him for 5 days or more. His approach is quite unique. He does, especially with young dogs, do quite a bit of the handling himself in the clinic; and you, the owner will be observing him quite a bit. And when you go to put into practice these techniques on your own, you will learn that it is not easy to get your timing and technique right.

But it is all worth the effort. There is much, much more to say and to recommend about Bobby Dalziel’s clinics. But you will be wise to give it a try yourself. I’m confident that if you give it at least five days, your dogs and your sheep will thank you. 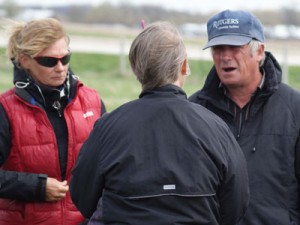 John is a retired pastor of the Evangelical Lutheran Church in America who has served congregations for over 40 years, including in rural, suburban, campus ministry and urban settings. His love of Border Collie sheepdogs has been fortified by his many friendships with shepherds all around the world. Nothing he has ever or will ever accomplish is as significant as the patience God, his wife and his friends have shown in putting up with his deficiencies.
View all posts by John →
This entry was posted in Border Collies, Farm Diary, Featured, John's Posts, Sheep and tagged Bobby Dalziel, Border Collies, clinic, Dogs, herding, Scotland, shepherd. Bookmark the permalink.