Our New Sheepdog from Scotland 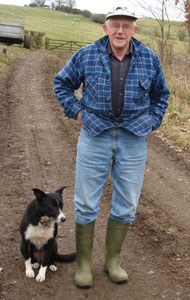 The doctor said I shouldn’t go, but I went anyway.

I had been in the hospital for six days in January and another three in February. On each occasion a nasty infection had set off a very fast heartbeat, called a supra-ventricular tachycardia that proved hard to tame.

But in December I had used my frequent-flyer miles to get a ticket to Manchester, England. I had made arrangements to stay at the homes of two former judges of our WWSDA Labor Day Trials, Stuart Walton and Peter Hetherington, and to go with Peter and his wife, Molly, to the Scottish Nursery Finals.

So, a few days after leaving the hospital in February, I thought of seeing all those great young dogs, then decided to ignore my doctor’s advice and go. He thought I should wait till I had a catheter ablation done in mid March before risking another episode and being forced to test the British National Health System. But I reasoned that I have been to Britain many times, I knew the airports, motorways and back-roads, and it would all be stress-free fun.

Now, neither I nor the doctors know why my heart jumps off to the races, but one reason might be that I can get intense. Everyone who has seen me work my very pushy Cap dog knows I can yell with the best of them. So it was a good thing I did this trip, because I got to be tutored by Peter Hetherington on his own ground, working his own dogs.

Peter took me to a big field where he put out some feed nuggets at the top of a 400 yard field. There he worked the two nursery dogs that he had qualified for the finals: Pete and Straid Nell.

One soft whistle. That’s all that was needed to stop a dog. It would stay there and stay there till whistled up. Two very soft pips to turn them away to me. A very soft hi-lo whistle for the come-bye. And all this with the one-year-old and hyper-active Pete. Even softer for Nell.

I wound up being so impressed with Nell that I bought her from Peter, and when working with him on her commands, I was surprised to learn that all of the dogs had been started on whistles. Now, Peter is a retired from many years of shepherding. He has won the Scottish National Championships once and the Brace Championship three times. He is in his 70’s. One big shift he has made in his training is that he works early and hard with young dogs, thinking they learn more before they are a year old than they do after a year. The other shift is that he has learned to distrust his voice. He believes it is all too easy to put a dog off by the emotion that is conveyed in the voice. So he doesn’t introduce voice commands till the dog is several years old, and sometimes he never does.

Besides that, Peter has decided that soft whistles are the best. I worked Nell for a while and could get her to stop and go come bye easily enough, but she didn’t recognize my version of Peter’s away pips until I realized I was giving them much more loudly than he did.

The day before I hopped on a plane to take Nell home, I drove a few miles from Peter’s to the Robert Burns Birthplace Museum, just a few miles down the road in Alloway. The first major exhibit there displayed the manuscript for the poet’s very first published song. He was 15 years old and wrote about a servant girl who had helped him in the harvest: “O once I lov’d a bonny lass…handsome Nell.” I couldn’t wait to tell Molly and Peter of this good omen. Peter said the omen was better sill, since two nights before, he and I had visited his veterinarian in the very house where Burns’ muse, Nell, had worked 236 years earlier.

A week after my return I received this e-mail from Peter and Molly:Hope Nell is now talking (and listening) with an American accent. We’re sure she will be settled in Illinois and getting to understand the different voices. Remember she is used to quiet, gentle Scottish commands so don’t get too excited John !!!

I see it all now as vindication of my seemingly foolish decision to risk heart problems going to Scotland. It was all very pleasant. And I had been given one more powerful impetus to chill out—to put behind me my stressed-out shouts, and instead be patient, quiet, and command my dogs very, very softly.

I’m certain this will all do me more good than any pill or heart ablation.

John is a retired pastor of the Evangelical Lutheran Church in America who has served congregations for over 40 years, including in rural, suburban, campus ministry and urban settings. His love of Border Collie sheepdogs has been fortified by his many friendships with shepherds all around the world. Nothing he has ever or will ever accomplish is as significant as the patience God, his wife and his friends have shown in putting up with his deficiencies.
View all posts by John →
This entry was posted in Border Collies, Farm Diary, Featured, John's Posts and tagged Alloway, animals, Ayrshire, Border Collies, Dogs, herding, Peter Hetherington, Robert Burns, Scotland, Sheep, sheepdog, shepherding, Straid Nell, training. Bookmark the permalink.

1 Response to Our New Sheepdog from Scotland