Pentecost 16a: The Limits of Rage and Zeal

The alternative first reading for the Sixteenth Sunday after Pentecost is Jonah 3:10–4:11. This, and not the Big Fish, is the heart of the book. Jonah is forced to preach a warning to his arch-enemies in Nineveh. They repent. God changes his mind and forgives them. Jonah is angry, and wants to hold onto his anger, despite the fact that he knows God doesn’t approve. God then teaches Jonah and all of us a lesson on what we should fear, love, and trust in our lives and in our politics.

After a huge spike in public approval of the anger behind Black Lives Matter demonstrations, such support has has dropped by 18% in the past two months, according to a Monmouth Poll. And though I haven’t seen any polls about this, I am quite certain that the country is also sick and tired of the screaming, and ridiculous conspiracy mongering going on from the Federalist website, to Breitbart, to Fox News,  to QAnon, and beyond.

It seems there is such a thing as rage fatigue.

I happen to whole-heartedly support the Black Lives Matter movement. The premise is golden: black lives do matter to God, and should to all of us. And for their lives to matter their history in this country and the collective responsibility we all share in that sordid history must matter. Also, BLM organizers and supporters should not take the blame for the arson and vandalism of a few criminals who come from the fringes of both the left and the right.

But, this all is to the point. Zeal and rage spawn all kinds of tragic unintended consequences.

In the Bible there is a solid tradition that holds up a thing called “zeal” as the purest form of piety towards God. Indeed, God, seen as a man, and seen as a mighty warrior, is often self-identified by jealousy: “The Lord your God is a jealous God (Deuteronomy 4.24; 5.9, etc).” God’s jealousy or zeal (the same Hebrew word), is also compared to the jealousy of a husband for his wife. And it is seen as a “devouring fire,” as zeal is pictured as the melting and reworking of elements that blacksmiths perform as they make bronze and iron implements.

According to this line of thought rage and zeal are good. This idea finds narrative expression in the horrendous story of Phineas, who earns his bona fides by skewering together an Israelite man and Midianite woman who were practicing mixed race sex in the presence of God (Numbers 25). The Levites too show their “exemplary” zeal in killing many unfaithful Israelites. One could say that just about all the prophets of the Old Testament, especially Ezekiel, are exemplars of zeal as they rage against the machine of injustice an apostasy. Surely the Maccabean revolt against the Syrians that gave us Hanukkah and the short-lived Hasmonean dynasty in Palestine was a movement that proudly claimed the mantel of the zeal of Phineas. And in the New Testament era, about 30 years after the death of Jesus, a group called the Zealots congealed to trigger a full scale rebellion against the Romans.

But history shows that rage, and it’s religious form of zeal, do burn themselves out. Such mass executions of the unbelievers are hard to sustain in a nation. Prophecy ends with Malachi. The Hasmoneans turn on each other, allowing Pompey of Rome to march into Jerusalem unopposed. And the Zealot rebellion ends with the destruction of Jerusalem and the Temple, and the mass suicide of Masada.

Who can stand in the heat of this devouring fire? Who can meet the test of such flaming pride, and purity?

The strange book of Jonah is the Bible’s most pointed critique of zeal. No, the central point of the book is NOT that God could make a fish big enough to swallow a man, and careful enough to transport him across the sea to spit him up safe and sound on the sand. The true point of the book is the tragic limitation of rage and zeal. 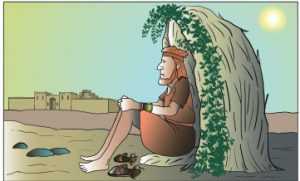 Jonah, Nineveh, and the bush. Graphic from idlewords.org.

And though the book is obviously a fiction, it speaks a truth deeper and stronger than history or science: Zeal is not the highest form of faithfulness. Compassion is.

Jonah flees God because he knows God is merciful. He has been called to preach repentance to Nineveh, the capital of the hated Assyrians—the people who had been slaughtering Israelites for decades.

Of course Jonah makes a run for it. To obey God’s call he would have to swallow his pride and repent himself of all of his red hot hatred for these enemies. Even though Yahweh, the God of his people, had called him to this mission, it would be a most bitter pill to for him to swallow.

But God gets his way. God hems Jonah in. Jonah pronounces the warning, “Forty days more and Nineveh shall be overthrown.” And, wouldn’t you know it, there was a miracle of repentance. From the great king on down, every man, woman, and child, even every pet and animal in the field, believe in God, put on sackcloth, and repent of their evil ways. The bit about animals is an obvious tip that this is fiction. But the truth is a holy one: People may not change. But you will never know until you preach repentance.

And, wouldn’t you know it, when the people of Nineveh repent, God changes God’s mind and does not destroy them!

Now Jonah is mad. The very reason he had made a runner from God’s calling was that he knew God to be  a “gracious God and merciful, slow to anger, and abounding in steadfast love, and ready to relent from punishing.”  All the while Jonah was raging, he knew in his heart of hearts, that God, wasn’t defined by jealousy and devouring fire. God overcomes evil not by evil, but by mercy and forgiveness.

But the story goes no. Jonah’s fire is still burning, and he wants to stew in the heat of it. His pride causes him to tell God he just wants to die.

We see here that rage itself has such a grip on Jonah, that it is dangerously close to becoming his ultimate concern–his god. He knows Yahweh, the One True God, is not essentially zealous and devouring. He knows; and yet he follows his own personal idol of rage and ruin.

The story comes to its climax not inside a big fish, but with Jonah and the bush. Jonah, wallowing in umbrage, sits and watches, still hoping for Nineveh to be burned. But he is burning in his zeal. So God appoints a bush to grow up and shade him; and Jonah is happy. But then, the ever teaching God sends a worm to destroy the bush in the heat of the day; and Jonah, once more, retreats into his default mode of resentment, and once again is convinced it would be better just to die.

Then God lowers the boom: “Jonah, isn’t it ridiculous—isn’t it tragic—and isn’t it the greatest apostasy for you to care more about the bush and your own comfort, than you do about 120,000 people that I am forgiving and redeeming? Haven’t you lost your perspective?”

Perhaps, for a time, it is good to rage. But rage and zeal burn themselves out.  It is good to be zealous for the right thing, but zeal that turns in on itself cannot be allowed to become our god. It cannot become the end all and be all to hold onto our resentments. It cannot become our goal in life to win arguments. All of us, in our daily lives and in our politics, must learn these truths.
The Spirit of Christ assures us that God is merciful, and that the way to overcome evil is not with more evil, but with compassion. That’s what the cross means. The Spirit of Christ moves us to build up our communities, and not tear down our institutions, unless we can agree to build better ones.

If God sometimes acts as a devouring fire, that doesn’t mean we should.

FIND ALL OF OUR PANDEMIC BLOGS BY CLICKING ON THAT CHOICE IN THE CATEGORY LISTING TO THE RIGHT OF THIS PAGE.

John is a retired pastor of the Evangelical Lutheran Church in America who has served congregations for over 40 years, including in rural, suburban, campus ministry and urban settings. His love of Border Collie sheepdogs has been fortified by his many friendships with shepherds all around the world. Nothing he has ever or will ever accomplish is as significant as the patience God, his wife and his friends have shown in putting up with his deficiencies.
View all posts by John →
This entry was posted in Church and Social Movements, Featured, John's Posts, Pandemic Blog, Reflections on Sunday Readings and tagged Black Lives Matter, compassion, forgiveness, Jonah, mercy, pandemic, prophets, rage, zeal. Bookmark the permalink.