The Old Testament reading for this coming 12th Sunday after Pentecost is Exodus 1:8—2:10. On this week in which we celebrated 100 years of women’s suffrage in the United States, and as we prepare ourselves in earnest to go to the polls for a globally important election, it is an apt time to consider five women who changed the world.

Pharaoh, the king of Egypt, looked all powerful. He was not only the head of state of the most powerful nation in the world at that time; he was also a god.

You don’t mess with Pharaoh. His wish was the command of all his subjects.

But then there were two women of a slave race, who no man of Egypt, much less Pharaoh himself, would have accorded any sort of respect at all. Their names were Shiphrah and Puah; and they were midwives.

Now, this Pharaoh wasn’t too bright. If he wanted to cut down on the frightening population explosion among the Hebrews, but maintained a potent work force for his labor needs, he wold have commanded that the girl, not the boy babies of the Hebrews be extinguished. Instead, he commanded that the boy babies be killed at birth by these two midwives.

But Shiphrah and Puah had other ideas. They simply resisted. And when Pharaoh inquired as to why these baby boys were proliferating, these two women again proved the king’s stupidity by claiming that Hebrew women were just too quick to deliver, and the baby boys apparently too quick to toddle off.

But the Bible is more interested in one baby in particular. He will be the leader of his people. He will receive fiery revelation from the Lord. He will spark a revolution in justice and ethics in giving the world the Ten Commandments and a start in thinking about slaves and foreigners and immigrants as human beings. But for him to survive the first day of his life a few more women would have to defy the odds and defy the men in charge.

So, an anonymous Hebrew mother, and her daughter, took this newborn boy, put him in a basket, floated him in the Nile, and watched. And wouldn’t you know it, right under this brain deficit king’s nose, his own daughter was the fifth member of this unlikely team, and found the infant. How convenient it all was—or was it not five clever women, working together to preserve life and preserve fresh hope for the world? Because Pharaoh’s daughter was smarter than her father, and figured the boy was Hebrew, and the boys sister just happened to be there to ask Pharaoh’s daughter if she would like a Hebrew midwife, and it just so happened that she knew a good one. So Moses was born, and his life preserved, by five women–women perhaps no more remarkable than the sisters, mothers, and wives living with us today. 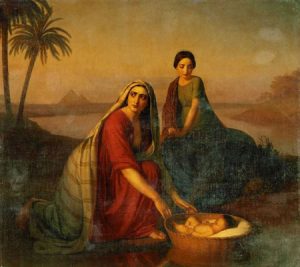 Moses lowered by his mother into the Nile, 1839-42
Alexey Tyranov

This past week’s celebration of 100 years since the ratification of the 19th Amendment to the Constitution should cause us all to think about how much better the world is because women refused to stay of a pedestal, or in the kitchen, or under the thumbs of men, and added their brainpower to making the decisions that shape or world. Will women make the difference we need? Will women help us stop the next war? Will they help us wake up and take serious measures to mitigate climate change? Will they make a wall to defend the weak and vulnerable against the abuse of power? Will they continue to be the primarily evangelists, and the backbones of our religious congregations, and so make sure their children are taught the way of the Christ?

FIND ALL OUR PANDEMIC BLOG POSTS BY CLICKING ON PANDEMIC IN THE CATEGORY LIST TO THE RIGHT OF THIS PAGE.

John is a retired pastor of the Evangelical Lutheran Church in America who has served congregations for over 40 years, including in rural, suburban, campus ministry and urban settings. His love of Border Collie sheepdogs has been fortified by his many friendships with shepherds all around the world. Nothing he has ever or will ever accomplish is as significant as the patience God, his wife and his friends have shown in putting up with his deficiencies.
View all posts by John →
This entry was posted in Church and Social Movements, Featured, John's Posts, Pandemic Blog, Reflections on Sunday Readings and tagged Hebrew, pandemic, Pharaoh, Puah, Shiphrah, suffrage, women. Bookmark the permalink.