The Samaritan Woman: Life That Gushes

We are still playing catch-up on the great dialogs of the Fourth Gospel appointed for Lent. Last Sunday was the Third Sunday of Lent, and the appointed Gospel reading was from John, chapter four, which features Jesus’ dialog with the Samaritan woman at Jacob’s well.

I subtitle this the “Life that Gushes.” Jesus asks a woman to give him a drink. She is amazed that he, a Jew, would even speak to her in public, much less ask for a drink of water from her.

Jesus replies that she is being held back by her lack of knowledge of God’s gift, and of him, the Giver.

She protests that Jesus seems to be arrogating to himself a power and prestige greater than Jacob’s. As a Samaritan, and heir of the legacy of the Northern tribes of Israel, she sees her own identity as shaped by the heritage of Jacob, even more than King David with his headquarters in the southern/rival city of Jerusalem.

Spring-fed, gushing water! The same Greek word is used to translate Isaiah’s picture of the fantastic redemption and renewal when God will bring back the exiles from Babylon. Luke must have thought back on that passage when he described the “leaping up” of the crippled beggar that Peter healed in Jesus’ name.

Gushing water is very much like the wind-like Spirit of God that Jesus spoke of with Nicodemus in the last chapter.

All of this is a meditation that John gives us on the deeper meaning of baptism—deeper because full baptismal life completely surprises, confounds, and overwhelms us.

The Fourth Gospel’s dramatic portrayal of this dialog shows us many examples of the kinds of channels or ruts that this gushing water breaks through. The Samaritan woman is hemmed in by many of them. First of all, she is a Samaritan. Her blood and ancestry hems her in because her people had been conquered by the hated Assyrians centuries before. And the Assyrians planted five colony cities of other captive peoples, and brought in five different pagan religions to obliterate the identity of her people. (This may add meaning  to the woman having five husbands since Aramid for husband and a deity are the same.) The Samaritans tried to hang onto their pride and their religion, but the Jews, who they might have found common ground with as fellow Israelites, despised them and separated from them as much as possible.

She is also hemmed in because she is a woman. Samaritan custom was much like Jewish, in that it stipulated that men should not talk with women in public. Besides, as the conversation reveals, this woman has had five husbands. Jews, and probably Samaritans as well, forbade more than three marriages in succession. And this woman was now living with a man out of wedlock. The wisdom book of Sirach, a part of the Old Testament deutero-canonical works, shows how dangerous women—especially disreputable ones—could be:

Do not give yourself to a woman

and let her trample down your strength.

or you will fall into her snares.

or you will be caught by her tricks.

or you may stumble and incur penalties for her.

6     Do not give yourself to prostitutes,

or you may lose your inheritance.

or wander about in its deserted sections.

8     Turn away your eyes from a shapely woman,

and do not gaze at beauty belonging to another;

many have been seduced by a woman’s beauty,

and by it passion is kindled like a fire.

or revel with her at wine;

or your heart may turn aside to her,

and in blood you may be plunged into destruction. (Sirach 9:2-9)

But in this dialog the water of eternal life—the spiritual water of baptism gushes and bursts all the “proper” channels. Blood, heritage, gender, moral standing, sacred place–all are swept away and cannot hem us in.

This happens because Jesus reveals himself in his humanity—not particularly in his spectacular, miraculous power. He acts as a prophet. He acts in his passion, or suffering struggle as a prophetic, human force working against the oppressive things that hem people in.

Jesus the prophet ignores the taboo of talking with a suspicious woman. He ignores the taboo against having things in common with Samaritans. He calls her to a true worship of God, in spirit and in truth.  He pours out his humanity to the woman, and she is, in turn, amazed that he knows everything she ever did, as only an insightful prophet would.

Then, the dam is broken, and she pours herself out to the people of her town. Perhaps she was always respected there, despite the fact that she was so often married and now living with yet another man. Or, perhaps all that disrepute was washed away now by the power of her testimony. In any event she became a powerful force. While the official (yet another thing that hems us in) disciples/cum evangelists are off scene, this woman does the work of an evangelist. She bears witness to just one fragment of Jesus’ power—“he told me everything I ever did”—and her neighbors are curious and inspired enough to come and check Jesus out for themselves. They too feel the Life gushing.

This is the full power of baptismal life—of eternal life—of the Life of a Christian.

Every day now, in this pandemic, we feel overwhelmed by a flood of bad news, by the shrinking economy (They call it “quality of life,” don’t they?), and by the social distancing we are asked or commanded to practice. Well, there is a mightier flood than that. If we too dialog with Jesus Christ, and allow him to call us further up and further in, we will ask of him and he will give us living water—a Life that virus and even death itself cannot touch—a Life that breaks through every demonic thing that hems us in.

YOU CAN FIND OUR OTHER PANDEMIC BLOG POSTS BY CLICKING HERE: 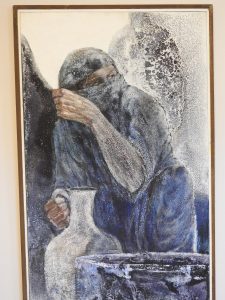 The Samaritan woman at the well with Jesus in the background. (Painting by Connie’s brother, Arch Leean.

John is a retired pastor of the Evangelical Lutheran Church in America who has served congregations for over 40 years, including in rural, suburban, campus ministry and urban settings. His love of Border Collie sheepdogs has been fortified by his many friendships with shepherds all around the world. Nothing he has ever or will ever accomplish is as significant as the patience God, his wife and his friends have shown in putting up with his deficiencies.
View all posts by John →
This entry was posted in Featured, John's Posts, Pandemic Blog, Reflections on Sunday Readings and tagged baptism, Covid-19, dialogs, eternal life, Fourth Gospel, Gospel of John, pandemic, Samaritan, well, woman. Bookmark the permalink.