Say It With Your Body

That’s what Gordon Watt used to say when I was working my young, excitable dog, Zac. It has taken me years to understand all that was bound up with that tiny bit of advice. 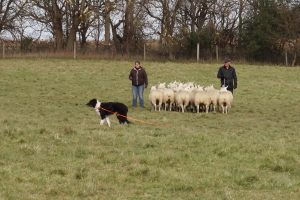 Gordon Watt (r) demonstrates how to get a dog in the “zone” with body language. Photo by John

We just completed one of our semi-annual handling clinics with Gordon, and I was reminded of how important, yet mysterious, this advice is. I think all novice sheepdog handlers make the mistake of thinking they are there to put something into their dogs rather than draw things out. With this comes the mistake of thinking they communicate with and control their dogs with their shouts, their whistles, their grand gestures with their wands or crooks or boogey bags filled with pebbles.

Young border collies first on sheep are feeling the stuff come out of them. They are so excited to be finally getting to do what they have been created to do that their own emotions are skyrocketing. Hyper alert, they are first and foremost figuring out the meaning of the body movements—the ear twitches and head turnings—of the sheep. Second, they are coming to terms with their own potential. Gradually they are also reading carefully every sound and even the tiniest movement of the human bodies of their beloved owners. 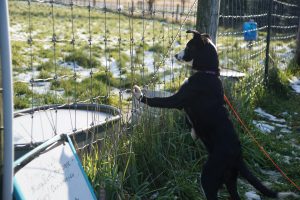 Border collies are wired to watch and react to the movement of sheep and handler. This young pup cant keep eyes off!! Photo by John

So, less is more. “With all this happening at once, someone out there has to be the calm one,” a wise shepherd once advised. So when the shepherd/dog handler moves, every movement, if it is to get the right job done, must bear the right meaning.

The most important thing I can tell a novice handler, who is taking a lesson or attending a dog handling clinic, is to watch the way the best handlers move their bodies. You will learn that the best handlers are letting the dog learn—not teaching. The best handlers are not hyper-reactive. They move quietly and calmly. And the exact way they turn their body has a powerful effect on the dog. A lean to this side or that, or a step in this direction or that makes all the difference in putting the dog at ease and getting the dog into that zone where it is feeling its own power come out.

Indeed, it is best, with a beginning dog, not to use verbal commands at all. Instead, a very occasional growl, or “hey,” or a mere slap on the leg, if they are used to convey the same meaning consistently, have a helpful effect on the dog. But a well thought out lean is always, always better than throwing up a wall of sound with shouts that have no meaningful body language to back it up, or a confusing random display of flailing arms.

Now, if this is true for dog training, it is perhaps even truer for people. In our smart-phone, and text-messaging age we have surrendered our most important tools of communication. The tone of voice has been surrendered because we prefer texting to voice mail. But it is even more tragic that we routinely deprive ourselves of the power of facial expression and the leaning in and out of face-to-face communication.

We used to learn and practice the art of salutation. A smile, a bow, a handshake as we spoke to people laid the foundation for our relationships. With them we said, “I respect you. I trust you. I believe in you.” And with this body language, so common that we were barely conscious of it, we calmed each other and got ourselves ready to get down to business. We weren’t there to be the center of the circle of belonging, or to control the other. We were there to lean on each other–to cooperate!

How many walls could we repair—how many wounds could we heal—if we could put aside our devices, take deep breaths, calm ourselves, lean in, and look into each other’s eyes when we talk?

John is a retired pastor of the Evangelical Lutheran Church in America who has served congregations for over 40 years, including in rural, suburban, campus ministry and urban settings. His love of Border Collie sheepdogs has been fortified by his many friendships with shepherds all around the world. Nothing he has ever or will ever accomplish is as significant as the patience God, his wife and his friends have shown in putting up with his deficiencies.
View all posts by John →
This entry was posted in Border Collies, Farm Diary, Featured, John's Posts, Sheep and tagged body langugage, Border Collies, communication, non-verbal communication, sheepdog training, Sheepdogs, smart phones. Bookmark the permalink.