It happened late last April. It happened again this Halloween. Our semi-annual Gordon Watt clinic here at Heatherhope Farm is getting to be the kind of thing that builds real character. It was in 1895 that we last had an October snow like this—with three or five inches of the stuff and a good stiff wind to make it come down horizontally. Just as, last April we had almost eight inches of the white stuff enhance our event. 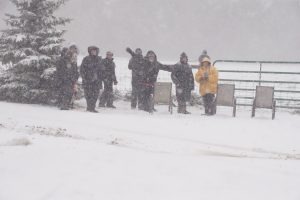 But our intrepid team of students, and our hearty leader, forged on. In fact, we didn’t skip a beat, but got 11 dogs out twice that day.

Dogs that wanted to buzz learned to calm down and get into the zone. Dogs that wanted to avoid conflict, learned to have confidence. And most importantly, all the handlers got better and better and polished up their skills throughout the four-day clinic. And when they weren’t on the field themselves they were watching how problems-to-come might be handled as they watched Gordon with other dogs. And when they weren’t watching dogs they were laughing and solving all the world’s problems around the great food they brought to add to the typical yummy spread that Connie puts out. (Connie, her foot in a cast, is very appreciative of the special help this time around.)

So, it was cold outside, but we are all warm inside—the way farming and sheepdog handling should be.

So, we look forward to April 23-26 as our dates for next spring’s Watt clinic. Perhaps the good Lord will grant us a little less character-building! 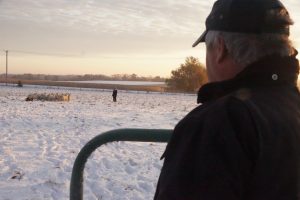 Friday, Nov. 1 of our fall Watt clinic saw the sun rise beautifully over the snowy land. Photo by John

John is a retired pastor of the Evangelical Lutheran Church in America who has served congregations for over 40 years, including in rural, suburban, campus ministry and urban settings. His love of Border Collie sheepdogs has been fortified by his many friendships with shepherds all around the world. Nothing he has ever or will ever accomplish is as significant as the patience God, his wife and his friends have shown in putting up with his deficiencies.
View all posts by John →
This entry was posted in Border Collies, Farm Diary, Featured, John's Posts, Sheep and tagged clinic, Gordon Watt, Sheepdogs, snow, training. Bookmark the permalink.