In Memory of Cap

As this is being written there is a newly empty kennel at Heatherhope. Our remaining six Border Collies, Bilbo the guard dog, and Connie and I salute our beloved Cap as we pass that empty space and remember the magnificent partner, family member, and progenitor who occupied it.

I write this and share it on our Heatherhope website for the sake of our many friends who knew Cap and who share our love of him and all dogs. 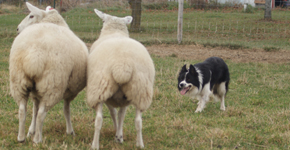 Cap was part of a litter bred by Wally Yoder. I bought that litter’s sire, Mirk (ISDS 236175), from a wonderful shepherd-breeder-trainer, Bill Elliot in the Borders of Scotland, and Wally Yoder bought Cap’s dam, Liz (ISDS 243853) from the same gentleman. This was 2002 as the foot and mouth outbreak of 2001 continued and these fine dogs didn’t have much work as stock movements had ground to a halt. From the outset, Wally and I planned to breed these two dogs that had both done quite well in Scottish nursery trials up to the time they were halted due to the disease outbreak. Once home we bred them as soon as Liz came into season. Wally’s Liz was too shy for natural breeding so we brought Cap’s parents to our veterinarian who got the two of them together in his offices, collected fresh semen from Mirk, and immediately inserted it into Liz.

The litter was born on Christmas Day, 2003. Ever since I brought Cap home Wally has reminded me, tongue-in-cheek, that I got the wrong pup. You see, Cap’s blaze had gotten much smaller in the interval between my choosing him and picking him up. I thought perhaps Wally had handed over a different pup. He thought there was a chance I thought he was pulling over a fast one on me, but actually there was so little difference between the pups my only concern was to wind up with a male. But Wally will forever remind me that I got the “wrong pup.”

Of course, Cap, his whole life through, was always the “right pup” and the “right dog” for Connie and me and Heatherhope Farm. 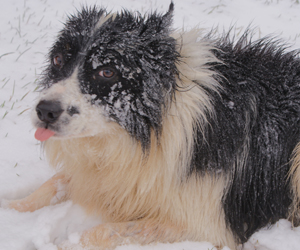 Cap, like his father, Mirk, had ample power to move sheep, along with an extreme reluctance to stop. While Mirk had been well trained by Bill Elliot, and tended to fetch and drive at a steady pace, I was the only one to ever handle Cap, and I couldn’t get that pace right, or the stops I wanted, or the proper shape to wider flanks. Cap’s hard driving style also made me so nervous that my mouth dried out so I often couldn’t manage to blow my whistle. So there was always murmuring around the handlers’ tent and well-intended advice about the virtues of quiet handling.

In spite of me, however, Cap picked up things fast. He could complete open courses by his first birthday, and we could at least attempt international shedding by his 16th month. We managed to wind up on the prize lists from time to time, and even to win a couple open trials. But what impressed me the most was the way he could manage to fetch mishandled sheep that had run back to the set-out pen—a task only the rarest dog is up to. 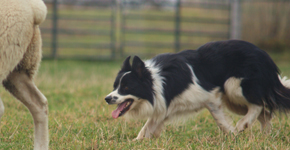 Cap on the job. Photo by Sandi Scott

While I was pretty consistently frustrated by not being able to handle Cap better, I started to overhear people whispering that a certain top handler was telling people that he considered Cap to be one of the most promising stud dogs around. I thought I misheard, or it was a joke; but it must have been true, and it must have been picked up by enough good breeders so that Cap sired over 50 pups in eleven litters. There are a handful of his pups and grand-pups that are among the very top herding dogs in the nation today. And many, many others who are doing fantastic stock work and making fantastic companions for people from coast to coast.

So, on Cap’s last day in this life, we laid him out in the shade, waiting for our evening appointment at the veterinarians. He was panting, and he was fading; but he seemed at peace. I stroked him and reminded him that this was his domain—with the grass and the leaves blowing in the wind, and the sheep spread out in the pasture of Heatherhope—the only home he had ever known. He had always been a faithful and honest dog. He had been the most gentlemanly of stud dogs to the bitches brought to him—always waiting patiently until they were ready for him. He enjoyed our sip of Scotch on the couch on an evening, but never outstayed his welcome, soon going to the door to be let back out to his kennel. I thanked him for forgiving me for my ridiculous yelling at him, and all the wrong commands, and for being patient, and teaching me to be patient in return. I thanked him for teaching me trust. I thanked him for those successes and wins that we finally achieved together that convinced some that I had finally learned a thing or two about handling. I thanked the God of Creation for putting a spirit like this into a dog like this. I thanked God for bringing us together.

But most of all, on that grass beneath the Sugar Maple, and a final time as the doctor gave him the injection that allowed him to slip into that ultimate sleep, Connie and I assured our dear Cap that he wasn’t alone…and that we love him always.

John is a retired pastor of the Evangelical Lutheran Church in America who has served congregations for over 40 years, including in rural, suburban, campus ministry and urban settings. His love of Border Collie sheepdogs has been fortified by his many friendships with shepherds all around the world. Nothing he has ever or will ever accomplish is as significant as the patience God, his wife and his friends have shown in putting up with his deficiencies.
View all posts by John →
This entry was posted in Border Collies, Farm Diary, Featured, John's Posts and tagged Bill Elliot, Border Collies, cap, creation, death, God, Sheepdogs. Bookmark the permalink.

12 Responses to In Memory of Cap