Triplets Born As First Lambs of 2018

As I write this there is still a dusting of snow on the ground, but spring and new life are heralding the Easter season. The purple finch is singing it’s boisterous song just outside the window. And we are in the full swing of lambing season. 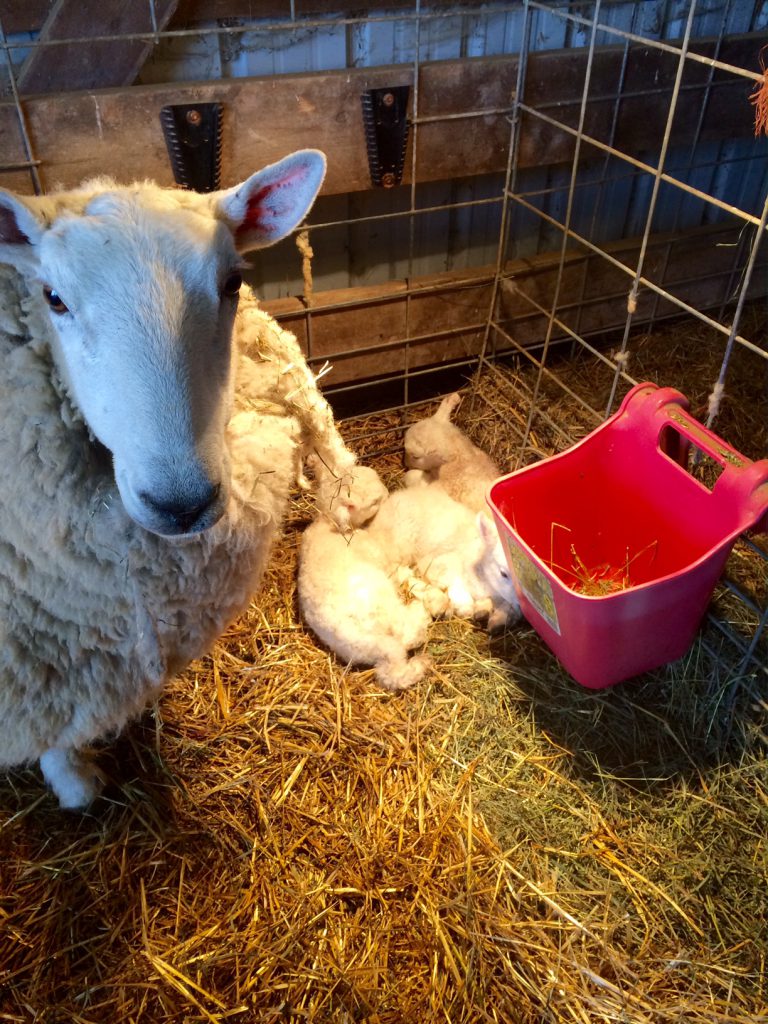 We had no births the last two lambing seasons due to my shoulder surgery in 2016 when we didn’t breed, and a dud ram in 2017. As Judi Elliot, our shepherd’s wife friend from the Borders of Scotland said several years ago, though lambing is lots of work, “it is LIFE!” It is life indeed.

Our first lambs this year were a set of triplets born the day after Easter Day in the late evening. We had to forcibly evict #248 from trying to pinch the first lamb (a ram) of that set, but the true mother was determined and calm, and birthed the two ewe-lambs in the lambing jug or pen. She is still a trooper, and all three lambs are content to share mom’s ample milk.

Since #248 and others seemed ready to “pop,” I took a quick sleep till about 3:45 a.m. that night, and visited the ewes to see if anything else was happening. All was settled, so I went back to the house. Knowing Connie would be a bit restless, I gently stirred her and whispered, “four o’clock and all is well.” As I poured myself and sipped a wee dram of Scotch whisky to get back to sleep, I thought of those old town criers who called out something like that ages ago. I thought it must have helped our ancestors sleep much easier knowing no thieves were about and no houses were on fire.

The call of the purple finch does the same for my heart now.

John is a retired pastor of the Evangelical Lutheran Church in America who has served congregations for over 40 years, including in rural, suburban, campus ministry and urban settings. His love of Border Collie sheepdogs has been fortified by his many friendships with shepherds all around the world. Nothing he has ever or will ever accomplish is as significant as the patience God, his wife and his friends have shown in putting up with his deficiencies.
View all posts by John →
This entry was posted in Farm Diary, Featured, John's Posts, Sheep and tagged Easter, ewe, lambs, life, Sheep, triplets. Bookmark the permalink.

2 Responses to Triplets Born As First Lambs of 2018