About a year ago I was running the dogs and a huge bird flew up from the field. Could it have been a bald eagle?

About six months ago, sure enough, one cruising along parallel to my car as I drove down Airport Road.

Then Connie and I found the nest, and saw one on a nearby branch. Then, recently, I saw a pair of them perching, then going off to hunt. Good friends of ours saw a couple of eaglets sticking their heads up that same day. And I snapped some good shots. 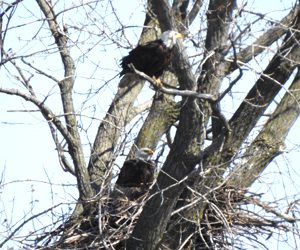 A pair of bald eagles nesting about a mile from Heatherhope. Photo by John

I have also seen a big falcon flying about in winter and early spring. I think, because of its light color on the underside, that it could possibly be a prairie falcon–but they are very uncommon around here.

Yet I keep finding piles of feathers about the yard, and even inside the barn once.

Then, yesterday, I looked out the window, and there was a beautiful falcon, in the midst of a pile of feathers, finishing off his meal. I snapped quite a few pictures; and looking at the bird books, I feel pretty sure it is a Merlin–which is a bit smaller than a prairie falcon, but doesn’t have that bird’s distinctive mustache that curves down from its beak. Here is a couple pictures that I took.

I still think the other bird I’ve seen flying in the past might be a prairie falcon, since it has the light underside, unlike the Merlin. But we will see.

In any case, these birds are quite dramatic, and fun to watch. I inspected the remains of the bird the Merlin killed and ate, quite near our house, and it was interesting to find the head and attached beak of the dead bird, picked very clean indeed. I am guessing it had once been a grackle. 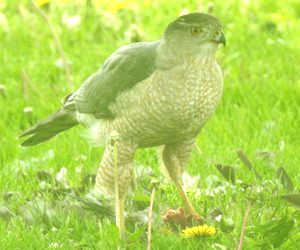 The Merlin, which migrates through Illinois, adds drama to our day. Photo by John 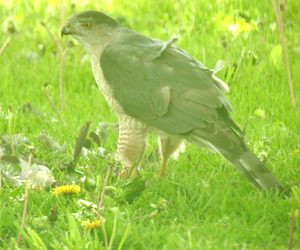 A Merlin falcon in our back yard, finishing off his dinner of a grackle. Photo by John

John is a retired pastor of the Evangelical Lutheran Church in America who has served congregations for over 40 years, including in rural, suburban, campus ministry and urban settings. His love of Border Collie sheepdogs has been fortified by his many friendships with shepherds all around the world. Nothing he has ever or will ever accomplish is as significant as the patience God, his wife and his friends have shown in putting up with his deficiencies.
View all posts by John →
This entry was posted in Farm Diary, Featured, John's Posts and tagged bald eagles, birds, Merlin, raptors. Bookmark the permalink.