We have seen Gordon help handlers of all levels make tremendous progress with their dogs. From the earliest stages of training very young dogs to putting polish on seasoned trial dogs, Gordon’s commitment to helping handlers and dogs improve bears fruit every time. 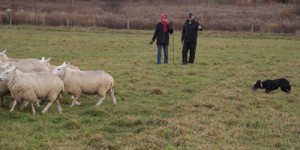 We have had Gordon at the farm many times in the past, most recently for clinics in May and November.  We hope to have him regularly in the future. So if you work with him you can count on building on your relationship. He also now lives and trains on Margaret Lass-Gardiner’s Nippersink farm in SE Wisconsin.

We have available working slots at this time; but we will always have room for people to audit–that is, to watch and listen as others work their dogs with Gordon. This too is a great way to learn as we will have Gordon wired for sound with a cordless microphone. So you will be able to hear what he says to each handler. Each day we will have  about 10 different dogs going out two times, so there will be a great variety of dogs, at different stages of development.

The fee for a working slot is $130 a day (two times out), for auditing it is $45 a day. You can sign up for any number of days. Both working and auditing include continental breakfast and full lunch. The clinic will be going on for just about all the daylight time on each of the days.

If you are interested in joining us for one or more of those days, please phone us at 815-895-9736 or e-mail heatherhopefarm@gmail.com. Go to the “Directions” tab at the top of any page on this web site for directions to the farm.

John is a retired pastor of the Evangelical Lutheran Church in America who has served congregations for over 40 years, including in rural, suburban, campus ministry and urban settings. His love of Border Collie sheepdogs has been fortified by his many friendships with shepherds all around the world. Nothing he has ever or will ever accomplish is as significant as the patience God, his wife and his friends have shown in putting up with his deficiencies.
View all posts by John →
This entry was posted in Border Collies, Farm Diary, John's Posts and tagged Border Collies, clinic, Gordon Watt, handling, Sheepdogs, training, World Sheepdog Trials. Bookmark the permalink.