“I want to hold her,” Connie pleaded with me.

She rolled up her shirt and undershirt and took puppy Number One from me. An hour or so before I had called to Connie, “We’re losing her.” 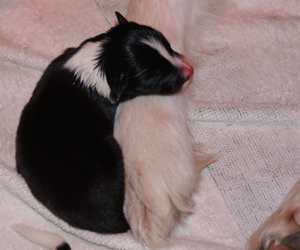 Puppy Number One is so small lying on Abbie’s foreleg. Photo by John

Tiny, black, with just a half of a white collar and a tip to her tail, Number One was born just two nights before. She came out fighting, torpedoing herself to Abbie’s side and sucking up a storm. It took her much bigger sister, Number Two, over five hours to make her appearance.

Just two in the litter, but they did their best to make up for their small numbers with enthusiasm for life. And mother Abbie doted on them, licking them dry, licking them to stimulate breathing, sucking and peeing and pooping, and keeping the whelping bed immaculate.

But something happened, and we found Number One off to the side, where it was cooler in the box; and she was barely moving. She wouldn’t suck when I put her to Abbie’s teat. She was barely moving and felt quite a bit cooler than the other pup. 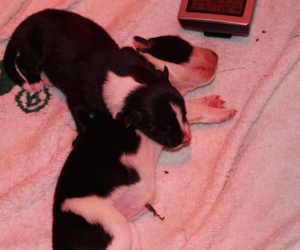 Puppy One is stronger now, but still much smaller than Puppy Two, who she is napping on. Photo by John

After rubbing her near the heat lamp, I called to Connie and rushed to the pet store for puppy formula while Connie filled a hot water bottle and worked with the pup. When I returned we tried to get some warm milk down her, but then read in our book that feeding milk to  chilled puppies is a bad thing since their digestive systems will have shut down. So on the book’s advice we tried a solution of honey in water. Also on the book’s advice I tucked Number One next to my skin and enclosed her in my undershirt and my heavy wool shirt.

In the meantime we phoned Margaret Rogers, our ever-faithful and ever-helpful veterinarian for some advice—she prefers Kayro Syrup to honey—when the pup is warmed up, then give milk.

So Number One had gotten chilled—away from the heat lamp the floor of the whelping box can get a little cool. And it is perhaps a bit more vulnerable since it is quite a bit smaller than Number Two. And it scared us because when it was at its weakest it was gaping its little mouth wide open—a sign that it was having some respiratory problems.

So, Connie took and held Number One to her body. The puppy started coming back. It wriggled and worked its way around Connie’s breast. Then Margaret and her partner, AJ came and tube fed her. Soon then she was sniffing and wriggling so that we put her back with her mom, and she suckled strongly!

Through the night another tube feeding and much watchfulness, and much licking by her mother, but now Number One is stronger and on her way back.


Riding around the fields with our other six Border Collies and tending to the guard dogs Frodo and Bilbo, I thought once again of how Connie and I contend each day with the Primal: blood, bones, life, death, decay and new life. Watching through a long pregnancy. Worrying for the dam and for her pups. Snuggling with five-month-old Bilbo and nursing his mentor, Frodo, after the recent surgery to remove the end of his tail, playfully mauled to death by the apprentice. Counting the ewe butts made blue by the ram, Mr. Samwise Gamgee.

All things Primal. Giving it our best to keep them alive. Praying to the Creator who sees with wider vision and who holds all struggling life to His body. Being overwhelmed with gratitude when the pups arrive, and when they breathe, and when they whimper, and when they suckle again. Marveling that bitches know to tongue little bodies in just the right places to make the wee and the poo come.

The Creator sees it all. Majestically holds it all. Whether they live or whether they die, they are the Lord’s.

And we, for now are denied the fullest vision, but we are so privileged to see little pinpoints of what God sees. We are saved from ebbing away as aging couch potatoes, watching the derivative and imitative on the tube. We are so blessed to live lives so saturated with the Primal. 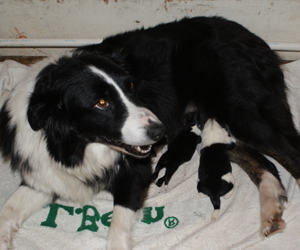 Abbie is the perfect mother as Puppies One and Two nurse together. Photo by John

John is a retired pastor of the Evangelical Lutheran Church in America who has served congregations for over 40 years, including in rural, suburban, campus ministry and urban settings. His love of Border Collie sheepdogs has been fortified by his many friendships with shepherds all around the world. Nothing he has ever or will ever accomplish is as significant as the patience God, his wife and his friends have shown in putting up with his deficiencies.
View all posts by John →
This entry was posted in Border Collies, Faith, Farm Diary, Featured, John's Posts, Spirituality and tagged Border Collies, farming, heatherhope, Heatherhope Farm, livestock, Margaret Rogers, primal, puppies, puppy, Sheep, Sheepdogs, veterinarian. Bookmark the permalink.