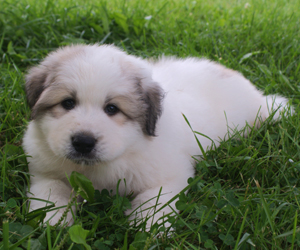 Bilbo is our new livestock guardian dog at Heatherhope. Photo by John

Bilbo is a Pyrenees puppy—only 6 weeks old. That’s too young, I know, for an ordinary pup to leave its litter and come to a new home. But Bilbo comes to Heatherhope this early to start important bonding with Frodo, his master and mentor, and with our flock of sheep.

We learned about this pup by grace-filled accident. Connie was having her Coumadin level checked at the nearby clinic and chatting with Darcy. They fell into talking dogs and Darcy mentioned that she and her husband, John, have a male and female who just parented a surprise litter. No, they didn’t want any more guardian dogs, so one was going to Wisconsin and one was available for us.

Connie and I picked up our pup yesterday afternoon and Connie named it Bilbo, to go with our J.R.R. Tolkien-theme. We now have the guardian dogs Frodo, Bilbo, to go with our chubby cat, Smeagol, and our breeding ram, Samwise Gangee. Of course, we used to have a ram named Gandalf, who has since traveled on to other farms to do his breeding work.

Pyrenees puppies, with their whiter-than-white, puffy fur, are supernaturally cute. One cannot help but babble baby talk, cooing shamelessly while rubbing a cheek against that fine hair.

We were prepared for that, having had to take Frodo away from thousands of adoring fans at the huge Sandwich Fair when he first came to us. But what we weren’t quite prepared for was how quickly and completely Frodo would throw himself into his job of watching over this bundle of love. As soon as we brought Bilbo home we got Frodo from the south pasture, put him on a leash, and lead him to Bilbo in the back yard. They hit it off immediately. When Bilbo tried out his wobbly hind legs by leaping oh so slightly up to nip at Frodo’s nose, the Big Boy barely flinched.

After a short time we put them in the barn together. Bilbo follows Frodo, then Frodo follows Bilbo awhile. We are hooking Frodo’s food up out of Bilbo’s reach and feeding Bilbo separately; and we have blocked off any way Bilbo might squeeze out of the fencing. But this couple complete one another, and Bilbo is completely satisfied with being with his mentor. We checked on the two of them several times during the night and each time found them sleeping with their bodies pressed up against each other. 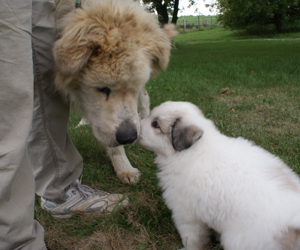 Frodo takes on Bilbo as his apprentice flock guardian. Photo by John

The two rams next door in the other section of the barn lot put their heads through the fencing and sniff Bilbo contentedly. And this afternoon, after Bilbo returned from getting his first shots and wormer, we put five of our yearling ewes in the same section with the master and apprentice. Bilbo sat with nary a flutter as one ewe came up to him and smelled. Only once did the pup make a sudden move toward the ewes, and they jumped, and Bilbo immediately sat back and observed. But the ewes will soon go from following and sniffing at him from a distance and  surely come up to him for his  licking on their faces—something they particularly like.

So, Connie and I are delighted with our new boy. She posted some pictures of Bilbo on her Facebook page and within a couple of hours last evening had 25 “likes” and seven or so comments.

As I say, supernaturally cute!!

John is a retired pastor of the Evangelical Lutheran Church in America who has served congregations for over 40 years, including in rural, suburban, campus ministry and urban settings. His love of Border Collie sheepdogs has been fortified by his many friendships with shepherds all around the world. Nothing he has ever or will ever accomplish is as significant as the patience God, his wife and his friends have shown in putting up with his deficiencies.
View all posts by John →
This entry was posted in Farm Diary, Featured, John's Posts, Sheep and tagged bilbo, Frodo, guard, guardian, livestock guardian dog, puppy, Pyrenees. Bookmark the permalink.