A 26 year-old hipster comedian held forth on Comedy Central a couple of weeks ago. My wife and I laughed at him for a few minutes as he did his impressions of drunk young women and his friend who acted the gangsta’, even with his first words on getting up in the morning.

Then he launched into a routine making fun of  religion. He once was a believing Roman Catholic, but now he has grown out of it. 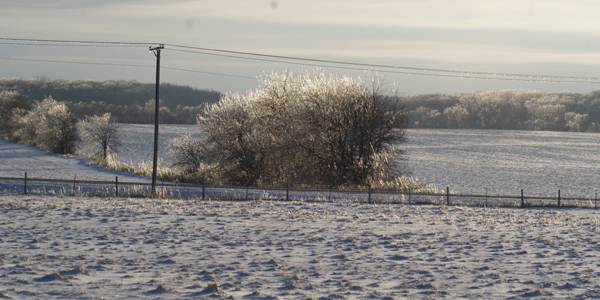 Surprising beauty on a bitter morning. Photo by John

I don’t mind making fun of religion. It helps us believers to remain humble about ourselves. But, really? At 26 years of age have you really lived enough to lose your faith?  I immediately thought of Bob Dylan’s old song, with a line that went, “You say you lost your faith, but you know it’s not like that. You had no faith to begin with, and you know it.”

The trouble is, so few young comedians, actors, authors and celebrities of various kinds do know it. Of course it’s not as straightforward as they or Dylan think. It may feel that you are losing your faith when you are just losing  a pale and immature version of faith. It may well be that what you are experiencing are the growing pains of faith.

Real faith takes a great deal of time. Real faith requires hard work. It is something that relentlessly pursues you through pain and doubt and despair. Genuine faith involves serious struggle with real life…over a lifetime.

The same weekend we saw the hipster comedian we also attended the funeral for Jim Smith. Jim was a guy who sparked our Saint Luke Lutheran Church congregation—a tiny band of the faithful I had the privilege of pastoring for 12 years—to raise phenomenal amounts of money for the Church World Service CROP Walk every year by doing his shameless musical-comedy routines every Sunday during Walk season at the beginning of service. For CROP Walks and other charities Jim would make up new weirdly wild words for his favorite hymn, “The Battle Hymn of the Republic;” and members would feel somehow that they simply had to empty their wallets for the sake of Jim as much as for the sake of feeding the hungry. Jim was the guy who once motivated the congregation to provide diapers for the poor by strutting across the chancel in red long-johns and a huge white nappy.

Jim was more than a prankster and comedian. He greeted every new visitor to church. And he pitched in whenever help was needed. But his wit and charm were his most notable talents. Jim helped everyone laugh at themselves and laugh at their troubles. Nothing was too serious to get down about because there was only one truly serious thing in the world—Redemption. Jim lived redemption because he was a long-sober recovering alcoholic who had a living realization of being loved back to life–one much like Ebenezer Scrooge’s the day after the three spirits visited him.

Part of Jim’s legacy was that he organized and supported Alcoholics Anonymous meetings at the Saint Luke. At Jim’s standing room only memorial service and the reception that followed there was an inexhaustible flow of testimony. Typical was the AA member’s who said, “Jim saved my life.”

One thing I thought of as I listened, was that there must have been at least one Jim Smith type among Jesus’ disciples. Jesus had to have had someone with a funny name—maybe it was Bartholomew—who kept things centered with humor and mischief. Life was undoubtedly tough for the disciples trodding along a rocky road of ministry, learning to carry their crosses to their own martyrdoms. So Jesus would have needed a Jim Smith type to keep the team laughing at the Devil and mindful of eternity and grace.

The other thing I thought of was aged wine—it comes into itself with time. You can’t lose your faith when you are in your 20s. You had no faith to begin with. Your faith, and your life, are still a-borning.

Jim Smith had died and been reborn before he realized how real and powerful is the grace of God. His faith flowered with age and he died at age 89 with a faith that had fully flowered.  It was people who had also lived long lives who give proper testimony and say, “Jim saved my life, because he taught me what a Higher Power was.” The church at the memorial was full of people who doubtless had thought they had lost their faith many times before they finally learned what faith really is.

The greatest Christmas television episode of all time (in my humble opinion) was the first Christmas special for the BBC series “Call the Midwife.” The series deals with the gritty and bloody things young midwives faced in the 1950’s in the slums of East-End London. Toward the end of that holiday special, Vanessa Redgrave voices the thoughts of one young nurse when she says, “Faith cannot be questioned, only lived.”

Oh, certainly, doubt is a part of real faith. But in the end the answers come not in propositional answers to our intellectual doubts. The answer is the mysterious touch of God that comes through community made alive with word and sacrament. This is a mystery  of strength in the very midst of weakness and doubt.

Christmas Day is just now over here on the farm. It has not been an easy December as we have had a good deal of bitter cold and an ice storm, and the drifts continue to rise and shift. Every day is a matter of dressing and undressing—getting on layers of long underwear, wool and down—to meet the elements. Get the Border Collies out five times a day, this season caring also for our son’s little Schnauzer-mix. Feeding them and Frodo the guard dog, the brood ewes, the two rams and the eight lambs. There are insulin shots for the Schnauzer, penicillin for a poorly ram, and maintenance pills for three of the sheepdogs and Frodo.

Meanwhile I often have thoughts that creep into my head, “Poor little me! What a drudge! How rotten can life be? Is there any point in it?”

And hidden behind all those thoughts is the cosmic idea, “What does it all mean?” And hidden just behind that is, “Who am I? Where is God? Does anything matter? Is there a fabric—a ribbon of meaning that flows with my memories, back through my parents to theirs and theirs and, finally, to a Maker? And does that Maker see and know? And does that Maker love enough to erase, finally, all the nonsense and loneliness and pain I have seen; and finally, finally, make it all count? Can this bitter cold that bites and devours and kills—can this be the signal of the End?”

It is at funeral services for old men like Jim, and like the service just the week before for Julie Wagner Cork, a young mother who beamed joyful, generous faith all her life—so much so that a whole community hurt badly at her passing and came to look to the pastors for hope and truth—it is at times like these that I am reminded and fortified once again. How could I forget? How dare I presume to question faith? I do not live in a frozen, shrinking cosmos—in a world made small to fit my moments of self-pity or selfishness. I live in a world made infinite with the giving and creativity and imagination and beauty of others. And these others are but branches—branches of a Vine that keeps on growing. This is what matters. This is what holds it all together.

I am stopped short in my rounds with the dogs in the bitter, stinging wind, to see shining ice on branches of trees that stretch out as far as my eyes can see. And well beyond.

Who am I to question?

Put on the layers of wool and down. Get out there and do my job. Welcome the exuberance of the dogs who leap into my lap and lick my face. Drink in the beauty. Let myself be swaddled in the fabric of it all.

Faith cannot be questioned. Only lived.

John is a retired pastor of the Evangelical Lutheran Church in America who has served congregations for over 40 years, including in rural, suburban, campus ministry and urban settings. His love of Border Collie sheepdogs has been fortified by his many friendships with shepherds all around the world. Nothing he has ever or will ever accomplish is as significant as the patience God, his wife and his friends have shown in putting up with his deficiencies.
View all posts by John →
This entry was posted in Border Collies, Church, Faith, Farm Diary, Featured, John's Posts and tagged alcoholic, alcoholics anonymous, Faith, Jim Smith, Julie Cork, Julie Wagner, redemption, unbelief. Bookmark the permalink.