The Glories of Glum and Sheep Keepers New Year

Lots of people complain when clouds and rains come. They think it dreary.  Not me—especially when we have endured the long, hot, dry summer of 2012. I complained when there was not a cloud in the sky for days and weeks on end and the grass stopped growing when spring rains didn’t materialize and summer baked in temperatures that soared above 100.

The rains that weekend were just the beginning of a string of good strong rains—the first we have had since November of 2011. All of this recharging the thirsty ground, grass and underground water table.

And yesterday was even more glorious. It was, after all, a New Year’s Day on the farm—the day we put the ram in with the brood ewes. 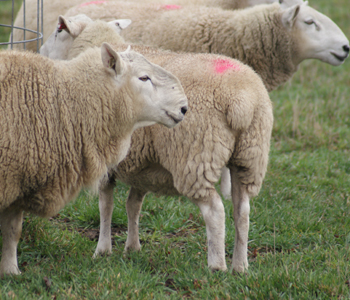 The ram “Jumper” checks out another ewe on sheep keepers’ New Year–the start of breeding. Photo by John

It was thickly overcast when we started the job by sorting the 32 ewes into groups: ewes to breed, ewes to keep for training dogs and ewes to cull and send to market. To do this we had to run them through our sheep sorting equipment, using our dog, Nell, to walk them and see who was limping and then to push them into the chutes. Nell is a good choice since she works very quietly and sits out of trouble up on the ATV when she isn’t needed.

I had studied last spring’s lambing chart to see which ewes were the best mothers and have troubles with their teats or bore lambs with inverted eyelids—a common nuisance. We gave different  little spray paint markings depending on which group the ewes should go in and then sorted them into different holding areas. In the process we trimmed the feet of a couple that had been limping a bit—ewes that were quite fat too since they have not been nursing lambs.

Then we gave booster vaccinations to the three rams we have been keeping and sorted out the one we call Jumper—our breeding ram of choice. We brought the brood ewes around near his pen and let him out to join them.

Here is the especially glorious moment. The ram comes out of his small area, in which he spends 99% of his time through the year, into the wide open spaces. One moment he realizes he is free to go anywhere in the world and the next he suddenly catches the scent of the cycling ewes and knows just where he must be. Nell can then easily steer the entire flock of brood ewes along with Jumper back to the south pasture where new growth grass is coming up. Jumper raises his head, opens wide his nostrils and pursues one ready ewe after another.

All this time, when we had been working the chutes, it had been a lovely coolish temperature, but not raining. As we go back to the barn to rearrange things and put out hay for the ewe lambs and the hair sheep, the rains come down hard. We gaze around and notice that the dry hard browns have given way once again to the soft greens. It all brings back gentle memories of British sheep farms where Border Collies give their all to work the flocks in scenes much like this.  The mud on our faces and hands and on our dogs is so much more pleasant than the dust of the drought.

John is a retired pastor of the Evangelical Lutheran Church in America who has served congregations for over 40 years, including in rural, suburban, campus ministry and urban settings. His love of Border Collie sheepdogs has been fortified by his many friendships with shepherds all around the world. Nothing he has ever or will ever accomplish is as significant as the patience God, his wife and his friends have shown in putting up with his deficiencies.
View all posts by John →
This entry was posted in Border Collies, Farm Diary, Featured, John's Posts, Sheep and tagged animals, Border Collies, Dogs, drought, farm, heatherhope, rain, ram, Sheep, sheepdog, Sheepdogs, shepherd, shepherding. Bookmark the permalink.