As an apprentice sheepdog, Spot has had a tumultuous work history. With the help of the insights from three of the very best sheepdog trainers in the world, Bobby Dalziel, Aled Owen and Gordon Watt, I have understood that I taught him well to bite sheep. I trained him on sheep that could run fast and quickly learned to do so when Spot was around. I also used my growling technique, that seemed to deter Spot’s father, Cap, from  gripping at the onset of his training, but with Spot it had the opposite effect.

Spot is now two years and two months old, and his younger brother and sister now are at 10 weeks of age, so it’s about time for the older brother to mature. He has made great advances in his technique with sheep, but still gets out of hand more often than I would like, and my own emotions get the better of me as I work him, so things can get ugly.

This morning I had to gather the flock off of the unfenced hayfield. The temperature is just above freezing and a heavy fog lingered on the field. I usually use one of the fully trained dogs to do this work since the sheep could easily scatter into other fields of other farms or run on past the pasture gate, down the lane and into the traffic on Airport Road. But this morning I thought, what the hell, I’ll use Spot. Perhaps doing some meaningful work with challenge will serve to sharpen my thinking, mellow him out and give us both more confidence. 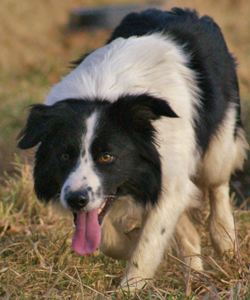 Spot has plenty of intensity, just waiting to be harnessed. Photo by Sandi Scott

After all, earlier this morning, as I rolled out of bed, I got to my knees and prayed that God would make me a more disciplined agent of his compassion and grace. I guess this is a prayer I’ve been repeating since having my awakening of faith as a teenager. And I still need it.

And working sheepdogs, especially firecrackers like Spot, is a great biofeedback exercise. Am I yet a more useful tool for God? Can I keep my volcanic emotions under wraps? Can I harness them for good purposes? Nothing convinces you that you are too quick tempered like sheep scattering to the four winds.

I walked Spot out. The sheep were on the far side of the field, about 250 yards or so away, and so their outlines were barely visible through the fog. Spot began to prance with his nose in the air. He knew they were out there somewhere. We had, in fact, gathered a bunch of sheep on this field yesterday evening—the first attempt at a gather here, and he was more tentative than he has ever been with sheep. Perhaps a sign that he was thinking before dashing.

Finally, at about 150 yards away, Spot located the sheep and beamed in on them.

I tried to send him “away” or in a counter-clockwise direction around them , and he wouldn’t go. The prayer preparation helped and I didn’t get sharp with him because he wasn’t minding. I realized he was feeling their pressure—in other words he was reading the sheep’s minds. They were desperate to make a dash for the barn or the pasture gate. So I finally sent him the direction he wanted to go and he indeed stopped them from stampeding.

Then we made our way quietly and in tidy control with Spot holding the pressure and making nice little arcs on the side of the sheep. Next, we stopped the sheep still and Spot came with me to open the gate. Then I was able to send him to the “come bye” or clockwise direction to gather the sheep. He felt the pressure and flanked over once again to slow them a bit, and then let them walk  into the pasture.

He kept  controlled and quiet all the way. No dog could have done it better.

It was a beautiful moment. Fog and mud and quiet sheep and a sheepdog apprentice doing his work. He came to the gate and obviously wanted to follow the ewes in and do some more work and perhaps have some fun biting a sheep or two. His eyes were on fire. But it was enough for now. Tomorrow we will take things one step further. Spot shook his head and followed me back to the kennel. Inside me the Hallelujah Chorus was sounding.

John is a retired pastor of the Evangelical Lutheran Church in America who has served congregations for over 40 years, including in rural, suburban, campus ministry and urban settings. His love of Border Collie sheepdogs has been fortified by his many friendships with shepherds all around the world. Nothing he has ever or will ever accomplish is as significant as the patience God, his wife and his friends have shown in putting up with his deficiencies.
View all posts by John →
This entry was posted in Border Collies, Farm Diary, Featured, John's Posts, Prayer, Sheep, Spirituality and tagged animals, Border Collies, Dogs, Faith, farm, handling, heatherhope, herding, patience, Prayer, puppies, Sheep, sheepdog, Sheepdogs, shepherd, shepherding, Spot, training. Bookmark the permalink.