One Great Pup Left to Place

Our litter of pups, born to Abbie and Cap on November 20, are now eight weeks old. They are quite lively and healthy.

Olive was the first to leave the litter and went to Missouri, where her new young owner is a nursing student. She is a dear friend of our veterinarian and a fine dog trainer. She will introduce Olive to both agility and herding.

Target (the French pronunciation, of course) is now called Sian (a Welsh name and pronounced “shawn”) will be going to a fine herding competitor who lives in the Upper Peninsula of Michigan. 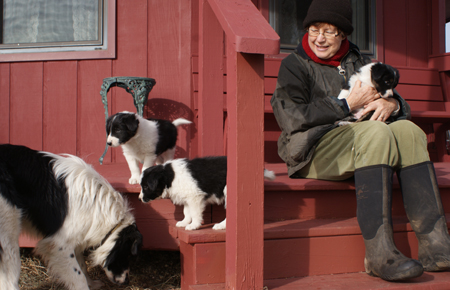 We will be holding on to Hector and Betty, so the one we call Bart (for Black Bart, since he is the blackest of the five pups) is up for sale. We have had an offer for purchase from someone who wants him as a companion dog, but we would much perfer to place him with someone who will work him on sheep.

The pups love the snow and exploring the sheep pasture and playing with their 2 yr old brother, Spot and their father, Cap. One of their favorite places to play is on the south side of our lower deck on the house where they can run up and down the stairs and crawl under to play hide and seek. The two boys are EXTREMELY competitive and love playing tun of war with almost anything they find.

John is a retired pastor of the Evangelical Lutheran Church in America who has served congregations for over 40 years, including in rural, suburban, campus ministry and urban settings. His love of Border Collie sheepdogs has been fortified by his many friendships with shepherds all around the world. Nothing he has ever or will ever accomplish is as significant as the patience God, his wife and his friends have shown in putting up with his deficiencies.
View all posts by John →
This entry was posted in Border Collies, Farm Diary, John's Posts and tagged Bart, Olive, puppies, Sian, Target. Bookmark the permalink.