It’s time to report on two of the younger dogs at Heatherhope.

Straid Nell came here from Peter and Molly Hetherington of Scotland this past March of 2011. In my experience it takes a good year for a good partnership to develop with a dog. Nell already works fine for me here on the farm, yet there are times when we are not quite on the same page. And at a trial things can get extra tense.

In Nell’s first outing with me at the Three Sisters Park trial in May I had to retire Nell on her first run of Open Ranch when she seemed a bit eager to return the sheep to me halfway through the drive. But she completed her next run fairly nicely.

Then, at the Bluegrass Classic in Lexington, KY, Nell ran against 75 other dogs in pro-novice and came in a respectable 9th. She was 18th in the second run, putting a bit too much pressure at the pen so that one sheep broke under my rope and  ran around the pen so I had to let the others out of the pen and they too circled the pen before going in.

I am very eager for the weather to cool off from today’s 98 fahrenheit so I can get Nell back into good training form. Here is a photo of her that captures something of her great agility and intensity. 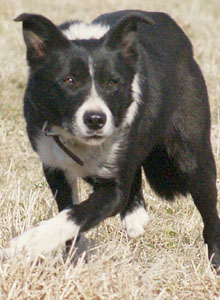 The news that has me thrilled is that Spot has turned a corner in his training. Bobby Dalziel had Spot working close at hand without gripping when he was here in April. But when Bobby left and I tried the same techniques, Spot quickly went back to getting in a bite here and there. He was learning that I would slow up with my arthritic knees and then he could be where I wasn’t and he could strike.

But I have been getting quieter and quicker and tougher with him and last evening he did quite a few little outruns beautifully. He did go after a hair sheep once, but showed real regret right afterwards and then continued on with great shape to his flanks. In fact, right at the start of last evening’s session the sheep ran away from him and I laid him down and he stayed right there, patiently waiting for his walk command.

Spot is truly changing his spots!

John is a retired pastor of the Evangelical Lutheran Church in America who has served congregations for over 40 years, including in rural, suburban, campus ministry and urban settings. His love of Border Collie sheepdogs has been fortified by his many friendships with shepherds all around the world. Nothing he has ever or will ever accomplish is as significant as the patience God, his wife and his friends have shown in putting up with his deficiencies.
View all posts by John →
This entry was posted in Border Collies, Featured, John's Posts and tagged Hetherington, Nell, Peter Hetherington, Spot, Straid Nell. Bookmark the permalink.