Surviving The Blizzard of 2011 (With God’s Help)

Posted on February 4, 2011 by John
May the peace of the Lord Christ go with you,
wherever He may send you.
May He guide you through the wilderness,
protect you through the storm…

So goes the concluding blessing of our morning prayer as my wife, Connie and I greet the day with the help of our Celtic Daily Prayer book.

That line about protection through a storm hits home these days as we and half the nation have been coping with the Blizzard of 2011.

The storm dumped (unceremoniously, as the local meteorologist put it) about 19 inches of snow on us. But those measurements mean little when you consider that the 40 to 60 mph north winds blew across open fields and pushed up massive drifts that measured up to 6 feet all along the lane that comes about 200 or more yards from the road and then around our house and up to the sheep barn.

The big question is how do you dig out when the snow is that high. Where do you push it? Where do you dump it?

I used our utility tractor (an old Ford 1520) with a front-end loader and a rear blade to push some snow aside near the sheep barn and burrow a trench about 50 yards toward the house. But this took me several hours and got my body cold to the core. Then I called for help.

The help came from our good friends and farming partners Chauncey Watson III and IV, who arrived about 9:00 p.m. Older Chauncey pushed the shallower snow out of the way fairly quickly; but when he got about half way from the road to our machine shed the snow was about 3 to 4 feet deep and gave way only with a fierce pounding to the blade on his heavy-duty, diesel truck. When he then moved into the 4 to 5 foot snow he was pounding so powerfully that he knocked one of the two lights off the plow mechanism and broke a hydraulic hose.

Meanwhile, his son had gone out to our sheep barn to get my Ford tractor back to work. He got stuck once, but kept at it. When his father had to give up and take his big truck back to home, young Chauncey came in for a little warm up with hot chocolate and then went back to work. Both father and son and others in their employ had been at the snow removal since about 4 a.m. Young Chauncey claimed he liked this hard work because it tested his manhood. He had already changed out of wet clothes a couple of times, but claimed he would finish the job of pounding out a trench so we could get our cars out and get out to the barn without climbing over 5 foot high snow. His father insisted that since I was home from the hospital only a couple weeks, and had heart troubles, I had to be dug out. I tried to explain that since they had yet another farm to get dug out that evening they could leave me till later and I would continue the slow slog with the Ford. I indeed doubted very much that young Chauncey could break through that evening.

But he did it. About 11:30 p.m. or perhaps somewhat later, young Chauncey finished the work and we got the dogs out for their final duty exercise before bed.

I certainly would like to be able to have my manhood tested and come out a winner so that I could go off and help others in this blizzard. But I was reduced to being fairly helpless. I have but a puny, lightweight little 25 horsepower Ford 1520 tractor. If I had been stuck in the snow like young Chauncey, I would likely have had to have given up. Certainly I could not run a big plow and fix hydraulic hoses.

Praise be to God for the Watsons and all the people who do know how to service these machines. Praise God for hydraulics and big, massive plows and snow blowers and melters. Praise God for the heavy, complex machinery and for the the army of police and township and state and city workers who work long hours to plow and salt roads and get mass transit and airplanes going again. Praise God for the ambulance and health workers who manage to get people to the hospitals and heal those who are there already and who show up with heart attacks from shoveling snow. Praise God for the government workers we love to criticize, but who really do act as our servants and who protect us from the storms. 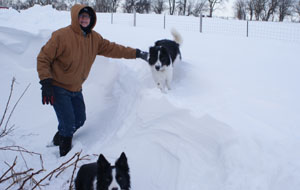 Connie with Jock and Spot on snow in the farm lane. Photo by John 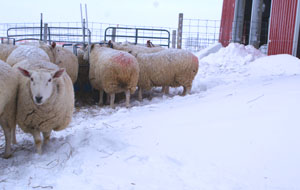 Sheep feed near barn the morning the blizzard ends. Photo by John 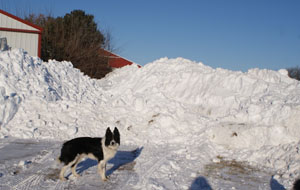 Cap in snow canyon after Watsons helped plow us out. Photo by John

John is a retired pastor of the Evangelical Lutheran Church in America who has served congregations for over 40 years, including in rural, suburban, campus ministry and urban settings. His love of Border Collie sheepdogs has been fortified by his many friendships with shepherds all around the world. Nothing he has ever or will ever accomplish is as significant as the patience God, his wife and his friends have shown in putting up with his deficiencies.
View all posts by John →
This entry was posted in Border Collies, Farm Diary, Featured, John's Posts, Prayer, Sheep and tagged blizzard, government, Prayer, protection, snow, snowstorm, storms. Bookmark the permalink.