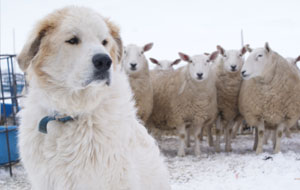 Mister Frodo surrounded by the ewes who trust him. Photo by John

Frodo is gentle of soul and strong of will. Frodo is fearless in fending off threats to those he is bound to defend.

The Frodo I am speaking of is our Great Pyrenees guard dog. He was so unimaginably cute and fluffy as a puppy when Dave Birch of Missouri sent him up to the man in charge of the poultry barn of the great Sandwich Fair, and when I crossed the grounds to bring him over to where Connie and I were doing the sheepdog demonstration—so irresistible that literally everyone who passed us and caught a glimpse of him had to come over and pet him.

Frodo was barely seven weeks old then. He had been born and raised among a flock of sheep, and with sheep he has been ever since. When we first put him into our flock he sat there and the sheep kept their distance. After 20 minutes or so a brave emissary from the flock came over to Mr. Frodo and stood there. Frodo licked her face and she returned to the flock. Later that same yearling returned with a friend, and Frodo licked them both. Soon the lambs and ewes were lining up to have their faces cleaned. And sometimes their butts as well.

For a year or so we worried at times if we would not have to give the giant dog away because he at times too a shine to following sheep and grabbing a leg now and then and even dragging a sheep on the ground. All great fun, he thought, but the sheep hated it. Whenever I came close to giving him away I heard reports of sheep people losing 10 or 20 sheep in a night to coyotes, and I thought better of it.

Frodo is always sweet and gentle with visitors, and especially to the children who love to admire his lion-like eyes, and his flowing locks, and his massive, Hobbit-like rear feet. But he is also amazingly strong (enough to have caught a big wether that kept butting him and throwing him to the ground) and fast (enough to chase a coyote off our property and over a couple miles of open terrain beyond).

So here is to Mister Frodo, Sir. We hate to see how slowly you get up and take your first few steps because of your arthritis, but we admire the way you do your guarding work day in and day out. You do all of this and get little besides your daily food and a little bit of scratching and a rare walk around the back fields as a reward.

But we couldn’t respect your more! You are a model of faithfulness and we salute you!

John is a retired pastor of the Evangelical Lutheran Church in America who has served congregations for over 40 years, including in rural, suburban, campus ministry and urban settings. His love of Border Collie sheepdogs has been fortified by his many friendships with shepherds all around the world. Nothing he has ever or will ever accomplish is as significant as the patience God, his wife and his friends have shown in putting up with his deficiencies.
View all posts by John →
This entry was posted in Farm Diary, Featured, John's Posts, Sheep and tagged animals, Dogs, farm, Frodo, heatherhope, Pyrenees, Sheep, shepherding. Bookmark the permalink.