The Vital Art of Laying Hedges 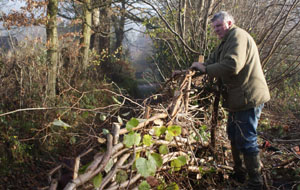 Late this November I had the thrill of returning to Shropshire, England. This gorgeous county on the west border of England with Wales is marked by impressive hills, small villages and towns, flocks of sheep and honest, hard-working people.

Two of my favorite people are Ken Gwilliam and Jude Bowers. They have allowed me to stay with them on many occasions and I was with them this year in their lovely home on the road between Clun and Craven Arms.

Ken has taught me a great deal about sheep, dogs, the kinds of characters needed to make the countryside tick, and about nature.

On this trip we spent a good part of one day hedge laying. Ken could have made far more use of my “strong back and weak mind” as my mother used to say. I helped a bit with some light lifting, but most of the time Ken did the work and provided running commentary on the noble and vital art of hedge laying.

We were working on a hedge that bordered the church in the village of Hopesay. I suppose Ken attended there at times, and his relatives were buried near where we were working.

If you have ever been in the southern parts of Englan or Wales, you have noticed that the narrow country roads are bordered by hedges. You have noticed too that hedges form the living fences that divide the different fields of the farms. It is a look that is beautiful indeed as it seems some rural roads are pleasant, long, green tunnels—pleasant enough if it is not your first visit and you are an American driver getting your first taste of driving on the left side of the road and the right side of the car and trying to adjust to the fact that you can’t see what is coming around the next bend in the road. And roads are all bends in rural England and Wales.

But few passersby know what goes into hedge making. These are not simply long rows of shrubs. Such a hedge would not be dense enough to keep young livestock from penetrating from one field to another. No, hedges are really composed of trees growing low and parallel to the ground, with their branches reaching up the sky or woven together to make an impenetrable barrier. 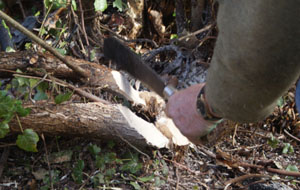 Ken Gwilliam pleaching with a brummock. Photo by John

Here is an outline of the process Ken used at that church ground: First he stood back and looked over the existing hedge that had become a bit of neglected mess. He formed a picture and a process in his mind about what trees could be revitalized and which had to go; and the way things could be bent and re-woven into a good, solid hedge.

Then he went about cutting and tearing out feeble and dead branches, and scraping debris from the roots so that he could work right down to the ground. Then he would sart pleaching. That is the process of bending a tree and hacking it with a little hand blade/ax type tool called a brummock. You hack almost through the tree trunk, rather low to the ground, leaving only a “tongue” of living tree at one point, which you bend down low and weave into stakes that you space every yard or two and into other trees you have laid down. If you have done it right, the tree – probably a hazel or a more brittle sycamore, will go on living and growing indefinitely. The vertical branches you have also left and woven, will also provide the vertical part of the living hedge. The stump you have left of the pleached tree, called a “heel” is also there, growing new sprouts. The “trouse,” or trashy branches, you have removed, or the longer, better ones, you have “heathered” together or woven along the top of the new hedge, to make things tighter and stronger. Where there are gaps in the hedge you will plant “quicks” or little whips of new, young trees, along with protective wrappings. If you do things in the real, traditional and time consuming way, you will “turf up” the final product by putting pieces of sod or turf around the tongue and the heel to protect them and promote new growth.

As you can see, this is labor intensive work. It also demands know-how and a bit of green-thumb artistry. An inexperienced hedger might lay a hedge down hill. That is a fatal flaw as sap goes up and a hedge laid down hill will surely die. Stakes must be put in at the right angle so that as the foliage grows the stakes are pushed upright and not down. And a hedge that has only dead wood filling the gaps will soon have weaknesses and new gaps that will allow the young lambs to merrily hop on through and get separated from their mothers.

For all this expertise and hard work, Ken gets paid seven pounds sterling for every meter of hedge he lays. That works out to about 140 pounds for a hard day’s work—much better than the 80 pounds he makes for other work. At today’s exchange rate the 140 pounds is the equivalent of about $230 a day.

Ken’s special pride in his work is such that he works to lay the tongues of his trees as nice and low to the ground as he possibly can. That way, the work of the next hedger to come along will be that much easier. Ken will never meet that next man, since it will be 25 years or more when he does his work. But in the meantime, each time Ken passes by, he will smile as he knows the hedges he has laid are among the best in the land.

John is a retired pastor of the Evangelical Lutheran Church in America who has served congregations for over 40 years, including in rural, suburban, campus ministry and urban settings. His love of Border Collie sheepdogs has been fortified by his many friendships with shepherds all around the world. Nothing he has ever or will ever accomplish is as significant as the patience God, his wife and his friends have shown in putting up with his deficiencies.
View all posts by John →
This entry was posted in Farm Diary, Featured, John's Posts and tagged countryside, England, hedge laying, hedges, rural, Wales, work. Bookmark the permalink.