We Believe in the Sun Even During Long Nights

It is that time of year when the darkness seems about to swallow the light. But, no! We believe in the power of the Light. The Darkness will not overcome it.

In ancient times, in their caves, and later in their wattle and daub huts, our ancestors must have been shaken by the foreboding of a long winter. When half the Mayflower Pilgrims didn’t survive that first winter, it was not that uncommon a tragedy. Winter can kill.

And so, they chanted, danced, staged processions, perhaps slashed themselves to draw blood to show the gods they were placing themselves prostate before the throne of grace. Please do not let the long nights and the cold winter devour the day! Please!

These days we have electric lights and central heating. And yet the onset of winter is still a challenge—one that makes us grateful we can hunt a perfect Christmas tree and decorate it, put lights up inside and out, and gather friends to eat and drink foods forbidden or at least frowned upon in other seasons. It’s a feast of forgetting: forget the sleet and snow and howling wind and bitter, bitter cold. Forget the slush and the salt stains all over our shiny new car.

Here are some scenes from Heatherhope Farm that bring you up to date with what is happening as we declare that we do indeed believe in the sun even at night (that idea comes from a piece of graffiti from the days of the Holocaust, in which someone in a death camp stated the defiant belief in the sun even at night, and in God, even when he was silent).

We believe spring will come. We believe and we are joyful that the extra effort our friends, family and fellow faithful put into caring for one another will drive back the forces of dark and cold once more. 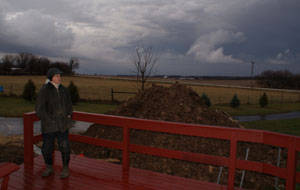 A late November storm rushes past as Connie watches. The mound of dirt from ongoing work on an addition to our house is now gone. Photo by John 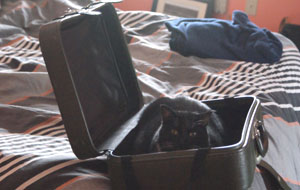 As we unloaded winter clothes from their storage in suitcases, Smoegel decides it is warm and cozy inside. Photo by John 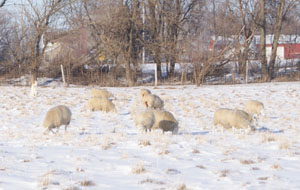 As long as gates have not been burried in drifted snow, we can get the sheep (and Frodo the watchdog) out on pasture. Photo by John 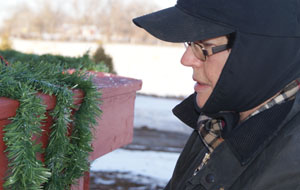 Connie decorates our front deck with garland and lights. Photo by John

Smoegel swats at snow flakes coming down outside his window. Photo by John

John is a retired pastor of the Evangelical Lutheran Church in America who has served congregations for over 40 years, including in rural, suburban, campus ministry and urban settings. His love of Border Collie sheepdogs has been fortified by his many friendships with shepherds all around the world. Nothing he has ever or will ever accomplish is as significant as the patience God, his wife and his friends have shown in putting up with his deficiencies.
View all posts by John →
This entry was posted in Farm Diary, Featured, John's Posts and tagged Christmas, day, night, spring, winter. Bookmark the permalink.