An Experimental Evensong in Dublin 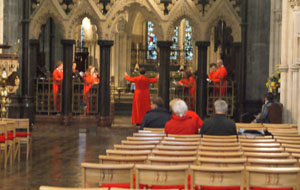 The choir of Christ Church Cathedral, Dublin, practice for the Experimental Evensong. Photo by John

At the start of my last pastorate, several members of the church council spoke up at a meeting to bring me up to speed on the congregation’s history and the many storms they had managed to weather—sometimes just barely. When one of them quipped that “you can’t kill Saint Luke,” we all laughed as we agreed that this could be a grand motto for this humble little expression of the Church of Jesus Christ.

Indeed, such could be a fitting summation of the biblical Book of Acts: You can’t kill the church on earth because it’s source of life is the One who rose from the dead. Surely at least one expression of true Resurrection Power is the miracle that all the pettiness, envy and injustice that the world can muster can’t kill the church. The Word of the Lord grows, no matter what!

On Saturday evening of the 25th of September of this year, my wife, Connie and I were struck by a bit of this power in the form of “An Experimental Evensong” conceived and composed by Dubliner Tom Lane, and lead by him and the Cathedral Choir of Christ Church Cathedral in Dublin. It was billed as a part of that city’s Absolut Fringe—a 16 day festival of the performing arts—and as something that would appeal to people no matter their religion “or lack of religion.” I am certain that this service’s impact on me was shaped by the way I have seen both the good and the bad sides of religion in my own life and in history.

Connie and I came to Christ Church toward the end of our two weeks of vacation on the Emerald Isle in which we took in the International Sheepdog Trial, and visited, as is our custom, a number of shepherds and sheep farmers who use sheepdogs in their work. Shepherding friends in the North took us to their church where the Presbyterian pastor couldn’t pass up the opportunity of the Pope’s ongoing visit to Britain to point out how their denomination recognized no head of the church but Christ. But friends we made in the South, and especially in the very poor western counties of the South, still had very bitter memories of less than Christ-like treatment of Catholics at the hands of their Protestant overlords. In fact, we decided to linger in County Mayo longer than we had first planned, in order to take in more of the haunting history of this part of the world where countless families were viciously disrupted and many were starved to death during times of famine of the 1840’s. I say they were starved because it was not merely an “act of God” or an accident of nature caused by “late blight” that ruined successive potato harvests. It was a deliberate policy of land owners and the government not to save people who were suffering. It was part of the warped religion of a great empire that insisted that people were best helped by being forced to be self-reliant and to play by the rules of the free market. For centuries the English had used more and more onerous means to exert control over the Irish, and after Henry VIII’s power struggle with the Catholic Church and the establishment of Anglicanism in England, these means of control inevitably became tightly woven with religion. By the 1840’s the native Irish Catholic farmers were far too poor to participate in the free global market and their landlords hadn’t the income to help them. Instead the land owners often burned the cottages of those peasants who could not pay rent. The government provided poor houses, but those forced families to separate and put young and old to work breaking rocks to build roads. In the end the economic and theological fashions of the day worked to assuage the conscience of the Anglicans-in-charge as they stood by and watched over a million of the Irish Catholic poor die of starvation, typhus and other famine related illnesses.

The wounds created by hundreds of years of crass domination of the Catholic Irish by the Anglican English are still raw. This story has not been related adequately in the history texts that we read in the United States, but it is there to be read most vividly in County Mayo and the West of Ireland. It is there in the ruins of abandoned villages, the museums and landmarks, and in the faces of the residents. In penal laws of old the English forbade the native Irish Catholics from being educated, from owning or inheriting land, or from having a real say in their own affairs. Yet their voices have never been silenced. They spoke, often in a roar; and they speak to us today.

All of this set the stage for our experience at Christ Church, the cathedral of the Church of Ireland—Anglican/Episcopal. And it was not your average bit of “Fringe Festival” performance art that was offered up there. It was more serious stuff. It was the voices of all those who have been the victims of oppression approved of by “official Christendom” down through the ages that we heard in that “Experimental Evensong.”

Anglican Evensong, lead by cathedral choirs, is always beautiful. Yet is it right to sometimes think of that beauty as crystal clear, absolutely correct, but sadly empty? Is it going through the paces? Is it custom-made for tourists searching through dry dust for relics of bygone religion? Is the Word of God being tamed as lessons are read and prayers chanted by priests in tones devoid of emotion or meaning?

But this Evensong was “Experimental.” Throughout, the choir and the organist intoned ancient chants, but were free also to improvise. I believe the choristers themselves were surprised by what came out of their mouths as around the corners and from behind the shadows of this cathedral, that has been for centuries the very sanctuary of oppressive power in Ireland, came resurrected echoes and groans. As the priest began to read the Lessons at this service—reading as the choir softly droned and murmured in the background—it seemed at first that he would do it in that oh so excellent, pretty and un-emotional manner we tourists have learned to expect. But then his heart began to show signs of being rent asunder and his voice began strain, as if it were possessed by a compassion from on high. The words were from Proverbs 28:11-28. How could a priest not be freshly moved when reading words like this in a place like this?

The rich is wise in self-esteem,
but an intelligent poor person sees through the pose…
Happy is the one who is never without fear,
but one who is hard-hearted will fall into calamity.
Like a roaring lion or a charging bear
is a wicked ruler over a poor people.
A ruler who lacks understanding is a cruel oppressor;
but one who hates unjust gain will enjoy a long life.
If someone is burdened with the blood of another,
let that killer be a fugitive until death;
let no one offer assistance…
The faithful will abound with blessings,
but one who is in a hurry to be rich will not go unpunished.
To show partiality is not good—
yet for a piece of bread a person may do wrong.
The miser is in a hurry to get rich
and does not know that loss is sure to come…
Anyone who robs father or mother
and says, “That is no crime,”
is partner to a thug.
The greedy person stirs up strife,
but whoever trusts in the LORD will be enriched…
Whoever gives to the poor will lack nothing,
but one who turns a blind eye will get many a curse.
When the wicked prevail, people go into hiding;
but when they perish, the righteous increase.

Was the priest’s heart also breaking when he then read from Luke 9 our Lord’s prediction that he would be betrayed? Were his whispers unusually soulful because he identified with the disciples who could not understand why Jesus should suffer so because they were blinded by their own thirst for greatness? Is this why we who worshipped felt equally indicted when we heard Jesus exhort our hard hearts with the words, “…the least among all of you is the greatest”?

The final hymn of the evening was “Stars of the Morning, So Gloriously Bright.” This “Experimental Evensong” was meant for the Feast of Saint Michael and All Angels which falls on September 29. Though the lessons and prayers for that feast were not used, this hymn did fit the occasion. It speaks of the visible and invisible universe filled with the “counsellors” and “ministers” of the Lord God of Sabaoth. They are the stars, the angels, the “Thrones, Principalities, Virtues and Powers…Living Ones, mystical Four, Cherubim and Seraphim,” that worship and adore God. But among them is also numbered the “sons of God” who have “shouted for joy” ever since the “earth was first poised in mid space.” When Joseph the Hymnographer, that ninth century author of this hymn text, wrote of “sons of God,” he may well have thought of yet another breed of heavenly intelligences. But I believe it fitting that we think here of ordinary people, those marked by religion and those notorious for their lack of religion. Yes, we, humble humans are the ministers of the Lord when we understand that the genuine God is, as Joseph wrote, the “Help of the helpless.” Our God commands a heavenly host that stands by us, ready to fight for right against the powers of oppression.

The final “Amen” of this hymn was sung by the Cathedral Choir, again with improvisation, as it wound its way through the congregation and out of the cathedral nave. As the echoes of their voices faded back into the shadows and the organ’s staccato notes then slowly melting away, their welled up in our hearts the sure and certain realization that you can’t silence the voices of the helpless ones who cry out. You can’t stifle the prophecy or the proclamation of the Gospel of redemption and release. You can’t banish the Word of Hope. You can’t kill the life of the church because it is not sustained by granite and marble or by pretty sounding words. The church draws life from the resurrection power of Christ’s compassion and suffering for righteousness’ sake.

The world needs more experimental worship such as this. It is a worship that dares to open our ears to the voices that will not be silenced and our hearts to the living church of God that cannot be killed.

John is a retired pastor of the Evangelical Lutheran Church in America who has served congregations for over 40 years, including in rural, suburban, campus ministry and urban settings. His love of Border Collie sheepdogs has been fortified by his many friendships with shepherds all around the world. Nothing he has ever or will ever accomplish is as significant as the patience God, his wife and his friends have shown in putting up with his deficiencies.
View all posts by John →
This entry was posted in Church, Church and Social Movements, Faith, Featured, John's Posts, Prayer, Spirituality and tagged Anglican, Church, evensong, Ireland, Roman Catholic, Tom Lane. Bookmark the permalink.

2 Responses to An Experimental Evensong in Dublin