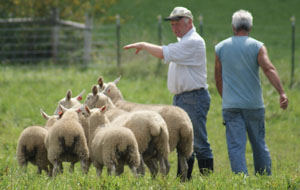 We thank Aled Owen of Wales for his excellent three-day sheepdog handling clinic held here at Heatherhope on August 31 and September 1-2.

Aled worked tirelessly from dawn to dusk each of those days helping nine handlers and 13 dogs advance in their teamwork. We heard nothing but praises from the handers for the excellence of help they were given, along with their hope that Mr. Owen would return to offer another clinic–something we will be working on.

We also heard good things from the trial field as Aled went on to judge the 25th Anniversary Wisconsin Working Stock Dog Association Trial in Portage, Wisconsin. One who scribed for him in the double lift finals said that it was like attending a clinic to sit in the judge’s box that day.

Thank you, Mr. Owen, for all your help!

John is a retired pastor of the Evangelical Lutheran Church in America who has served congregations for over 40 years, including in rural, suburban, campus ministry and urban settings. His love of Border Collie sheepdogs has been fortified by his many friendships with shepherds all around the world. Nothing he has ever or will ever accomplish is as significant as the patience God, his wife and his friends have shown in putting up with his deficiencies.
View all posts by John →
This entry was posted in Border Collies, Farm Diary, Featured, John's Posts and tagged Aled Owen, clinic, handling, Sheepdogs. Bookmark the permalink.