How Sheep Survive A Storm 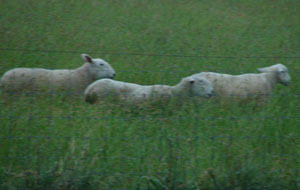 Sheep turn their bums to a storm. Photo by John.

The sky turned steel gray and then near black. The wind whistled and whipped and lightening flashed. The weather radio had warned that it would all be a destructive mass, rushing over 60 miles an hour through our little piece of the country. I ran out to turn our new picnic tables over so that they would not blow down to the road.

As the rain started to lash, we gazed out the window to see the power of it all. And there we noticed them. The sheep were in their typical storm formation: All standing stoically, like so many fleecy statues, facing away from the pounding wind. They had turned their ears down and their bums to the wind.

Heroism is often depicted as flinty struggle against evil. I wonder if the best life strategy might be to simply survive to carry on another day.

I’m glad for the young trees that know how to bend. Because of it they can live on and on and on.

I recall how I have tried simply to crush the will of a bold dog, like our Bess, to no avail. I would never have gotten her to stop while herding sheep if I hadn’t learned first just to speak quietly to her and ask her to slow down first. I couldn’t beat her. I had to just hang in their with her.

And now the sheep try to show me. You can’t stop a storm that’s hurtling at over a mile a minute. You might as well just turn your bum, chew your cud…and simply outlast it.

John is a retired pastor of the Evangelical Lutheran Church in America who has served congregations for over 40 years, including in rural, suburban, campus ministry and urban settings. His love of Border Collie sheepdogs has been fortified by his many friendships with shepherds all around the world. Nothing he has ever or will ever accomplish is as significant as the patience God, his wife and his friends have shown in putting up with his deficiencies.
View all posts by John →
This entry was posted in Border Collies, Faith, Farm Diary, Featured, Free Range Philosophy, John's Posts, Sheep, Spirituality and tagged animals, Border Collies, Faith, farm, herding, nature, Sheep, Sheepdogs, shepherd. Bookmark the permalink.