The Death of a Good Farmer

But our memory of ourselves, hard earned,
is one of the land’s seeds, as a seed
is the memory of the life of its kind in its place,
to pass on into life the knowledge
of what has died. What we owe the future
is not a new start, for we can only begin
with what has happened. We owe the future
the past, the long knowledge
that is the potency of time to come.
That makes of a man’s grave a rich furrow.
From “At a Country Funeral” by Wendell Berry

The site was a little, white-framed Methodist church on a hillside surrounded by farm fields in Kentucky. Gradually the sanctuary filled with family and friends. The elderly preacher was a bit off-kilter. I thought it was perhaps because he was reaching his last years of effectiveness, but I realized gradually it was because he was so shaken by loss—a loss and a shaking that was far less private than I could imagine.

A farmer had died.

His name was Bob Greenwell. He had reached 76 years of age. He had lost his home to a fire when he was a young child, and lost both parents not long after that. He had served his nation in the army in Germany, worked as a barber to help put himself through college, and taught high school biology for 25 years. In the meantime he had come into the life of my own family when he married my sister, Joan. We knew him as tall, slender, very quiet, but also very kind and very, very hard working and practical.

People came to honor him for all kinds of qualities and all sorts of good deeds done. But surely one of the most important things he should be rememberd for is being a good farmer. He farmed the old-fashioned way, by getting to know every type of soil, every hill and sink-hole on his farm, and every animal he raised. He had won grants and awards for not only taking from the farm, but for putting things back, like fertility, trees, ponds and erosion controls. Wendell Berry would say of farmers like Bob, he was married to the land—he didn’t rape it.

After a hymn and prayer and some scripture, he gave his eulogy: “The very first Sunday on the job here, Bob greeted me and said, ‘If there is anything at all that you need, just tell me and I’ll see to it.’ I thought and told him my sermon keeps slipping off the pulpit. The next Sunday my sermon didn’t slip off. There was a nice little ledge built there. Couldn’t have been nicer.”

When the preacher asked if anyone else had something to add, Bob’s daughter Kelly was the first to step up. Her words were so right and good that I had a hard time breathing. She spoke of Bob’s care for the land, and of his brainy curiosity that kept him up late at night reading the encyclopedia. She told how he lectured students and warned them that they couldn’t get though life on “free love and nickel beer,” and how every now and then the family would open the mail box by the side of the road to find a full beer bottle there—a true sign of lasting respect. She spoke of how he fashioned wagons for kiddy rides and the first indoor plumbing for the little church on the hill we were sitting in. She reminded us all how he claimed to despise all those stray dogs Joan opened the home to, but how he built the world’s best shelters for them and worked and sat and napped with them at his side.

One of Bob’s students, now a family man himself, testified about how intimidating Bob was to have as a teacher—at first. At first it was his impressive physique that convinced even the most mischievous of young men that they didn’t want to mess with this teacher. But these students grew to not only deeply respect Bob, but to consider him a life-long ally in their struggles for success.

As a brother-in-law, as a preacher, and as a bit of a farmer who got as much advice as I could out of Bob, I felt obliged to take to the lectern after Kelly. It took me awhile to clear my throat. Then I mentioned that on the car I had driven down to the funeral that day I had a bumper sticker that read: “Humankind. Be both.” That pretty much summed up what Bob meant for me. No nonsense. Nothing frilly or high-falutin for Bob. Like all the very best of people it was not heaps of words or pious promises that mattered: it was sure character and follow-through. Let others talk. He would just do what needed to be done. He was humanity and kindness at their best.

Yet, it was more than a family member and friend that had died. It was the kind of farmer we cannot afford to lose—the kind that doesn’t only take from the land, but who puts back. I have been farming for eight short years, but I can already see this clearly. If I wanted to spread chemicals and cram livestock into containment buildings and keep them on a steady diet of growth hormones and antibiotics, I could always go down to local Farm Bureau or university extension office to get advice. But farmers like Bob who have a deep knowledge of his particular farm and who know how to farm a particular farm in a way that is healthy and good for the whole web of life—those farmers are hard to find. I knew how much I would miss our conversations and his example.

The morning of the funeral my son and I had had a long conversation with Eric, one of Bob’s sons. Eric now lives in Somerset, Kentucky. His wife and he are both veterinarians and are building up their own clinic there. But since their practice is just getting off the ground, Eric works for the federal government inspecting big livestock installations. Such installations are the face of industrial agriculture in the United States. By industrial I don’t mean industries own them. No, it would be silly for corporations to own farms since modern farmers live like slave laborers. Farmers are squeezed because they must make the huge investments and take huge economic risks, while the costs of their inputs like seeds, feeds, fertilizers and chemicals are controlled by industry and the prices they can get for their grains and their livestock are set by the industrial marketplace as well. Big agri-businesses like Cargill and Monsanto thrive because they use farmers and saddle them with the debt, the risks and the ridiculously thin profit margins.

Eric inspects facilities that keep chickens and pigs and cattle indoors. They are confined in extremely tight quarters and raised by the thousands and the tens of thousands so that output can match the appetites of corporations and stockholders in the industrial side of things. I myself see these kinds of facilities all around me and I know that this kind of livestock rearing is the only kind that is dealt with and supported by the Farm Bureau. In my conversation with Eric we came to the uncomfortable “conclusion” that it may not be pretty but as long as Americans want only the very cheapest food, this is how things will be done. To have this kind of production the animals are pumped full of antibiotics and growth hormones and are genetically manipulated to put on weight even if the overall or long-term health and welfare of the animal must inevitably suffer. To be sure there is no “long-term” for them as they are pushed to gain weight quickly, before the worst of the side effects of their treatment catch up with them.

This seems to be the way the world is going and we all had to ache a little for the loss of Eric’s dad. Farmers like Bob are more and more a thing of the past. People who care not only for big production numbers and short term profit, but also for the good of the wider community, and the welfare of the land and of each animal, must get out of the way of this “progress.”

I know that being a “hobby farmer” and for only such a short time, my words would ring a bit cheap. But I still felt compelled to declare something to the family and friends at the funeral.  I declared that I thought Bob was human and kind. I declared that we should not be resigned to losing the ways of this breed of farmer. We should think more. Stay up at night and read those books. Walk the ground and get to know each hill and sink-hole and each animal.

And I, if I am to let the seed of Bob’s life and death matter, must quit spouting words and get back to the work of my farm. As Wendell Berry says at the end of his poem, we have to get back to work “lest the dead die a second and more final death.” 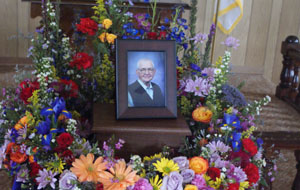 Memories of good farmers and good farming are the seeds of a good future. Photo by John.

John is a retired pastor of the Evangelical Lutheran Church in America who has served congregations for over 40 years, including in rural, suburban, campus ministry and urban settings. His love of Border Collie sheepdogs has been fortified by his many friendships with shepherds all around the world. Nothing he has ever or will ever accomplish is as significant as the patience God, his wife and his friends have shown in putting up with his deficiencies.
View all posts by John →
This entry was posted in Farm Diary, Featured, Free Range Philosophy, John's Posts. Bookmark the permalink.