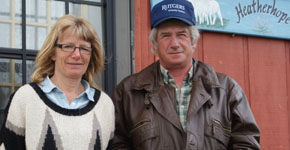 Karin Soderberg and Bobby Dalziel were at Heatherhope in April. Photo by John.

Famed shepherd, Bobby Dalziel of Scotland shared his unique style of handling dogs for the very first time in the American Midwest this April. At Heatherhope and at the farm of Janet and Paul Henning he worked with  21 eager and appreciative handlers from six states from April 20 to 28.

While Bobby showed handlers how to use a long line (about 75 yards) and a 6 foot lunge whip, he invited handlers to follow him around the field. Meanwhile, Karin Söderberg, herself an accomplished handler and winner of the 2007 Continental European championship, explained the techniques.

Bobby also graciously consented to wear a wireless microphone so that all participants could hear what he was saying no matter where he was on the field.

The use of the long line and lunge whip give the handlers the tools they need to keep complete control on dogs, stay quiet, and convey corrections quickly and consistently.

One participant in the clinic summed things up when she said these techniques were the missing link in her own training regimen.

Bobby, of course, is the winner of three International Supreme Championships. He learned his techniques from long-time shepherds, and now he is passing along his keen insights into understanding what various dogs need to make them into “real dogs” at work on farm and trial field.

We are most appreciative of all the wonderful people who gathered to talk dogs and learn how to be better handlers. Special thanks goes out to Donna and Howard Peterson who helped us by offering a lovely bedroom in their own home to make Karin comfortable, to Sandi Scott, Pam Wolf and Debbie Buddish for helping with many, many things, and, of course, to Janet and Paul Henning for hosting Bobby and Karin in Wisconsin. Oh, yes, thanks to to all the handlers who spotted sheep, especially to Anna Repke who did so very quietly the last few days when the sheep were in need of an understanding dog.

The local press visited the training sessions on the first day and the story and photo were picked up by the Associated Press and appeared in papers nationwide. You may be able to look at it here:  http://www.journalstandard.com/features/x57968997/Illinois-farm-hosts-famous-sheepdog-trainer 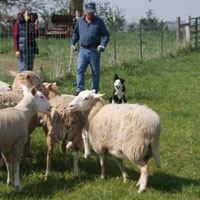 John is a retired pastor of the Evangelical Lutheran Church in America who has served congregations for over 40 years, including in rural, suburban, campus ministry and urban settings. His love of Border Collie sheepdogs has been fortified by his many friendships with shepherds all around the world. Nothing he has ever or will ever accomplish is as significant as the patience God, his wife and his friends have shown in putting up with his deficiencies.
View all posts by John →
This entry was posted in Border Collies, Farm Diary, Featured, Sheep, Uncategorized and tagged Border Collies, Dogs, heatherhope, Sheep, Sheepdogs, shepherd. Bookmark the permalink.