The Pace of Farm Life Quickens

The pace of life is picking up here on the farm. This past week we have had a several important steps: shearing and the first dog trial and lambs born for the season.

Friday, the ninth of April we had shearing time. Tom Johnson, comes in with is pick-up and sets up shop in the barn with his shearing machine and nine foot tall burlap bags on a metal frame. We were ready for him with the brood ewes sorted into one group and the yearlings and 2-year olds in another (last fall we didn’t breed the yearlings since we were using the same ram for three years in a row.). We also had a screen table set up to “skirt” the cleaner fleeces. While Tom sheared the sheep, Connie took those cleaner fleeces, pulled off the dirtier belly and crotch wool, and beat out debris from the rest so that we could sell about 100 pounds of clean wool for local spinners and weavers.

Shearing at Heatherhope. Photo by John

The shearing went very smoothly as it always does with Tom. It went even better than in past years since this was the first time we did our shearing before lambing, so we didn’t have little lambs to rustle up, and we didn’t have to listen to mothers and lambs complain about being separated.

Tom and I and a dog put the sheep into one side of the barn and then squeeze them into a small handling alley. I then catch and feed the sheep to Tom, who wrestles them to the ground and has them clipped in about two minutes each. He is very good to the sheep as he leaves only a rare nick now and then.

After all these years it still seems a bit funny to see the sheep newly shorn. They look so tiny. But they also are more comfortable and rub themselves less on the feeders and fences. And it will be cooler for them to be used in next week’s demonstration and the following handling clinic.

On Saturday I traveled up to Portage, Wisconsin, for the first dog trial at John Wentz’s “Big Yellow Boots” trial. Dog trialling is great fun, and satisfies the old urge to compete, but it also is a great place to see just how sharp and versatile a dog really is. At trials a dog sees unfamiliar sheep in unfamiliar settings. While at home the dog and handler settle into routines, but on new ground you see how clever and strong the dog is as it copes with many challenges. I was especially anxious to see if Cap would be more settled on his fetching and if Jock would be able to develop more confidence and power.

It was the first trial ever for our young Jock, who turns two years old next month. He had four runs over the weekend and got a bit more confident each time. After his first and even second times out I had my doubts about him as he stopped several times on his initial outruns to get the sheep, and even failed to put the sheep in the pen at the end of the first run. All along he seemed to be rather worried and looked at me for direction often—all signs of weakness. But I tried to settle and encourage him with my voice, and he gradually got better. He penned the sheep the last three times and only stopped briefly the last run and made a brilliant, long finish of his outrun after that little hesitation. He might make a strong herding dog after all.

Abbie had one terrible run and one very nice one over the weekend. The first run was ruined because I wasn’t blowing my whistle clearly as she reached the sheep and I don’t think she knew what I wanted. But she is solid and ready for another season of competition. I think eventually she will be able to handle just about every challenge that comes her way.

But it was Cap who thrilled me the most. He is now seven years old and for at least three of those years has worked wonderfully at home, but is always far too pushy on the sheep at the start of his runs, getting them going much too fast to steer well through the course. But Saturday he stopped nicely and came on quietly on the fetch. There was one ewe that kept breaking off from the others and started to go her own way. She was pretty headstrong in this and presented quite a challenge. But Cap kept his cool the whole time and we managed to get a very respectable 85 points out of 100 in spite of the difficulty. So I was very happy that Cap was able to show off his considerable shepherding skills in a trial situation. 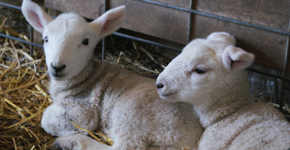 And meanwhile the bred ewes back home obliged me and didn’t start lambing till I returned to help Connie. Gestation is 147 days and we put the ram in with the ewes last November so that lambs would come starting about April 13. One day early the first lambs were there. We had the equipment ready: lambing pen, heat lamp, OB gloves, scissors for clipping the navel and iodine for dipping it. And there they were, just about a hour after the morning feeding of the ewes, and just after we gave the brood ewes more room by moving the un-bred sheep out to pasture. Ewe number 25 had obviously born them, but another ewe was frantically trying to adopt or “pinch” one of the lambs as her own. We chased her and the others away as Connie put the gloves on (to avoid putting the wrong scent on the lambs) and carried the lambs into the pen so that the real mother could join them and they could bond. We clipped and dipped the navels on two nice looking ewe lambs and “stripped” the mom’s teats (squeezing them from top to bottom) to rid her of any waxy plug and make sure the milk was flowing. It was a bit nippy, so we turned on the heat lamp, and watched the new family do their thing.

In the meantime Connie and I have been rearranging and boxing and moving books from my church office to the home and trying to get things shipshape around the farm for our upcoming events: herding demonstration this coming weekend, handling clinic with Bobby Dalziel the following two weeks, a visit by a number of refugee children at the first of May and our “Meet and Greet the Lambs” on May 22.

After breakfast this morning Connie and I were thinking about all the work that needs to be done in the house and around the farm. I thought the only respite we might expect is if we were to retire from our new retirement.

Things are hopping here at Heatherhope.  But it sure makes life fun.

John is a retired pastor of the Evangelical Lutheran Church in America who has served congregations for over 40 years, including in rural, suburban, campus ministry and urban settings. His love of Border Collie sheepdogs has been fortified by his many friendships with shepherds all around the world. Nothing he has ever or will ever accomplish is as significant as the patience God, his wife and his friends have shown in putting up with his deficiencies.
View all posts by John →
This entry was posted in Border Collies, Farm Diary, Featured, John's Posts, Sheep, Uncategorized and tagged animals, Border Collies, Dogs, farm, lamb, shearing, Sheep, shepherd. Bookmark the permalink.