Posted on March 29, 2010 by John
Our friend Pep asked us, “Do you ever get tired of all of this.”
We had just returned from a lovely dinner at Villa Verona, our favorite local Italian restaurant, and I had to quickly change clothes to take the dogs out for their fourth of five obligatory runs for exercise and elimination. It dawned on her that farm life isn’t all idyllic.
Our dinner out was part of a typically full day at Heatherhope. But really no day is typical if “typical” means boring and routine.
It used to make me laugh when, as a pastor, the assisting ministers and acolytes would ask me, “Anything special today?” Sometimes I would joke and say, “No, just the same old celebration of Christ’s resurrection and victory over sin, death and the devil.”
Yesterday was Passion Sunday, marked by a Palm procession into church and a reading of the Passion narrative, and for my good old Saint Luke Lutheran Church, First Communion. But I’m retired now, so Connie went off to church alone since she is singing with the fabulous St. Luke Choir until Easter.
In fact I missed church altogether yesterday. That’s because of Floss’ Big Adventure. Floss is the oldest Border Collie in our little family. When I was frustrated by being a neophyte sheepdog handler trying my best to handle dogs all by myself, I finally took the advice of others and bought a fully trained dog. I bought three-year old Floss from Ken Gwilliam of Shropshire, England, and formed a lasting friendship with him in the bargain. She was a dream. She turned the right direction every time and stopped on a dime (rubbing her little belly red in the process) when I said “stand.” She was a delight to handle and gave me time to think about what was happening in that complex interaction between sheep and dog. 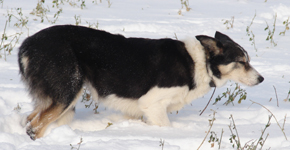 Floss shown a couple winters ago. Photo by John

John is a retired pastor of the Evangelical Lutheran Church in America who has served congregations for over 40 years, including in rural, suburban, campus ministry and urban settings. His love of Border Collie sheepdogs has been fortified by his many friendships with shepherds all around the world. Nothing he has ever or will ever accomplish is as significant as the patience God, his wife and his friends have shown in putting up with his deficiencies.
View all posts by John →
This entry was posted in Border Collies, Church, Faith, John's Posts, Spirituality, Uncategorized and tagged Border Collies, Church, Dogs, Passion. Bookmark the permalink.